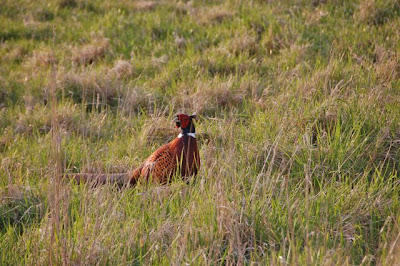 I was once driving along in England with a elderly couple in their tiny car when they hit a pheasant. Bam! The husband pulled over. Picked up the dead bird. Put it in the boot. Got back in the car and started down the road. "Jolly good. Dinner."

I lived there for a while and knew a bunch of people who had to pay for those 'dinners'. Darn birds would not get out of the way in advance, were slow to move when they did, and were often only taking off when hit.. right at grill or headlamp level :p They were worse than the masses of suicidal rabbits. Very pretty birds, but not too bright!

From the number that tried to commit suicide by standing in front of our van I would say they are either incredibly stupid or deeply depressed. This particular pheasant would appear each night around dinnertime on the back patio of our vacation cottage in Dorset England. He would come right up and peck on the glass while we were eating. Gorgeous bird.