Dakota is having his birthday party today, at Hooters. I have expressed my disapproval, but he is eighteen, and already enlisted in the navy. He is a big boy now, at least that's how Dave put it when he backed up Cody's choice. And really, Hooters is fairly innocuous. His other choice was a beer bike. Thankfully David said "NO!" as loudly as I did. I think (hope) Cody was just trying to get a rise out of us. He knew there was no way we would say yes to that, even if the legal age to drink beer is 16 here. Anyway the party is all settled and my big problem is the cake.

You see, years ago, I made an X-rated birthday cake for my father-in-law and my brother -in-law whose birthdays were the same week. I will spare you the details. It did have a paper bikini made from cupcake liners, but once that was removed the cake was a real eyeful. Dakota has requested THAT cake for his birthday. Thing is, neither of the guys I made that cake for were my son. I just can't do it. So I made a beach babe cake. Even David said it was lame. Might as well have been a Barbie cake. So I "sexed" her up a bit. String bikini made out fruit roll-ups, purple jeweled belly button piercing, and I used a couple of red M&Ms to make her look "cold" under her bikini, if you know what I mean. The problem is fruit-roll ups have a certain, ummm....transparency issue. This cake is all set to win a wet t-shirt contest. Cody is happy, David is impressed, and I am just hoping I don't get a call from an irate parent when the party is over. 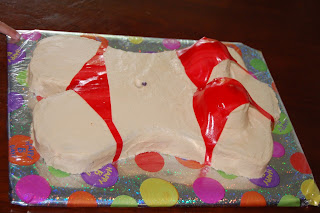 Click on the picture to make it larger.
Posted by Shannon at 4:04 PM

You have just earned 'coolest mom ever' points in that boy's eyes for years and years to come, not really for the cake itself, but more importantly, for your willingness to make him that cake!

This is just the beginning of what Cody will learn when he leaves for the Navy. It is part of life and part of who he will become in the future. There will be experiences you will not know about but someday he may want to talk to "Mom". Don't act shocked just be thankful he respects and loves you enough to share with you!

Oh wow! lmao! That is a GREAT cake!! I just am in shock still that Cody's old enough to like girls! lol! ;) ;) You do win cool mom points here, for sure!

i see you have not lost your cake making talents! ha! have fun.