This weekend Alonzo, Colin and I went on a camping trip with the Cub Scouts. This is the first camping trip the boys will remember. The last time we went camping they were both really small and we stayed at Guadalupe River State Park in Texas. This camping trip was full of fun and exciting things and we had one heck of a time.

We arrived at the campsite at 0930 and had our ten man tent up buy 1100. Yes, I said ten man tent. I know what you are thinking, why such a large tent for only three people? Well, we are a family of six and had big visions of doing a lot of camping when we came to Germany. Well that never happened as it was harder to figure out than we anticipated. In fact this was the first time the tent has been set up since we arrived in Germany. How odd, we use it for the first time just weeks before it gets packed up for Malawi. Too funny. 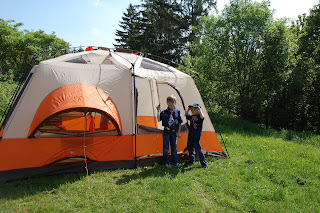 After everything was all set up, it was time to divide the scouts into two groups. One group would go hiking and the other would go fishing. We were in the group that went hiking first. The hike lasted about 2.5 hours and was about 4 kilometers. On the hike we took time to teach the boys a little bit about reading maps, orienteering, and leave no trace behind. The boys had to identify five different types of trees and birds. The tree part was easy. The bird part was much harder. Finding the birds was a very difficult task. We could hear them all over the place but could not seem to see them. 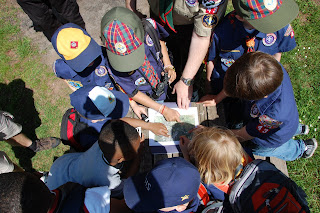 One of the highlights was the lizard that we found sunbathing on a log. Colin being the boy that he is could not pass up the opportunity to try and catch the little guy. The Corwin’s would be so proud. He snuck up on the lizard and bam!!! There he was in Colin’s hand. We took a moment to let the scouts touch him and look at him closely before we returned him to his sunbathing. 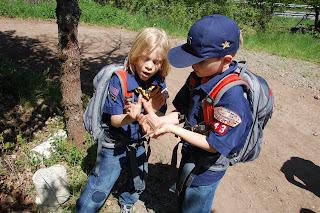 The other highlight of our hike was the bikes we saw when we stopped for lunch. There had to have been at least 30 trikes that passed close buy us.

Once we arrived at the fishing hole, the scout learned the rules of fishing and to bait a hook to catch a fish. Alonzo and Colin both caught one trout each. They were so excited. Even more exciting was the cleaning of the fish. I did not think either of the boys would want to clean the fish but they both proved me wrong and stepped right up to clean their fish.

The fish were cooked with a few other items to create our dinner for the evening. While the adults were preparing dinner the scouts were out learning the rules of kick ball. They had a blast. They really worked up an appetite. Although Alonzo does not like to eat fish he was compelled to taste it, seeing that he killed it.

In the evening we had our bonfire and enjoyed roasting marshmallows and making s’mores. 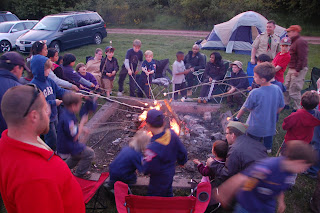 In the morning we gathered around the fire and ate our breakfast.

After we completed our breakfast we headed over to the launch pad to teach the boys how to make matchstick rockets. Alonzo, with the help of the scout leader, was able to get his rocket to shoot about 8 feet. Incase you don’t know what a matchstick rocket is; let me take a moment to tell you. You take a matchstick and wrap it in foil, making sure the tip is completely covered. You place it on a bent paperclip at a 45 degree angle. Take another match, light it and hold it under the tip of the rocket. It you have wrapped it correctly, then the head of the rock will ignite and the rock will launch. The better the rocket is wrapped the father it will launch. I was able to get mine to go about 12 feet. 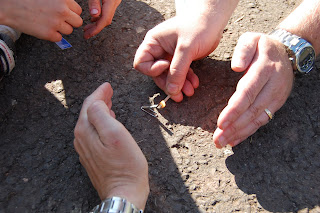 The boys and I had a blast on our camping trip. Alonzo and Colin both earned the following belt loops: kickball, fishing, and hiking.

Click here to see all the picture I wanted to use.
Posted by David at 12:54 AM

Wow! What a tent and what a great trip! I am so proud of Colin and Alonzo (especially Alonzo) for gutting their own fish AND eating it! I have the purgect fishing spot for is this summer! Yummy catfish. Alonzo, I LOVE your haircut!! And now that I KNOW you can get up early and be in a good mood, I'll expect it. Colin; you look like you are ready for your own tv adventure show! Better get used to all the animal sounds at night or you won't sleep for three years! David! Great photo album. I love the fire picture!! I can't wait to see you all! Meow! Aunt Teri

Teri, I have been told that sometimes at night you can hear the hyenas. I don't know if that is cool or just scary.

Would you believe I have actually camped at Guadalupe River State Park?

Those cub scout pics are great. It looks like it could have been my boys, roasting things over the fire, inspecting bugs, etc. I'm glad to hear scouting is available abroad.

I love Guadalupe State Park! It is may favorite state park back home. We take the boys to the river there every summer when we are home. We used to live only 35 minutes away so we went there often.

There is scouting overseas depending on where you are stationed. We had scouts in Jakarta too. As far as can tell there isn't an active boy scout group in Malawi but David will be taking over with something called the Lone Scout Program which allows boys to continue with scouting when they are someplace without access to a scout pack. He is determined to make an Eagle Scout out of one or more of the younger boys.

And we totally hear you guys about Scouts. James and I actually helped start a Troop... with James as Scoutmaster... right before he got hired with State. Our oldest is only an Eagle Project away from Eagle. He has all the merit badges, etc. We're hoping to finish that this summer and have him be Eagle by the fall. Crossing our fingers...

That is too cool! My grandfather was an Eagle Scout. He was born in 1909, so he must have been one of the first US scouts to make it through. ? Anyway, my husband regrets, to this day!...that he did everything except the eagle project. He was *this close*. Why, oh why, did his parents not make him finish?

I'm still in awe over the size of your tent. Holy huge batman!!!

Hope you get to use it in Malawi!!

It is a two room tent. With six of and all of our junk camping we want a little space. We are hoping to use it in Malawi, although I will admit that camping out with hyenas or lions and just canvas separating me from them freaks me out just a bit.

If nothing else the kids will camp in the yard. They will enjoy that after living in apartments and townhouses for the last four years. We are all really looking forward to having our own space.