Wordless Wednesday--Boys and Their Toys 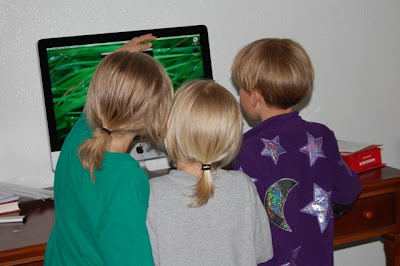 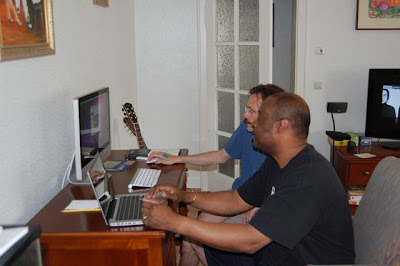 This is indeed great shot and very informative blog.

It seems they're exploring (kids)!

I see myself, lol

Shannon - that anon is a troll, as you no doubt know. We used to get the same 'pretend ignorance' on my blog all the time over my son, might be the same FS blog stalker. Who would post something like that when you can't see faces? All you see is cute activity! And yes, boys are such tech fiends! I can see making a gender ID mistake in real life.. young boys have soft features, but on a blog with names and a title of "BOYS ..." duh! What's up with people who think we ought to raise our kids by other people's standards? I just bring this up because I wanted to share how having long hair, and having to deal with self-centered nosy people, has made my son very confident in his appearance. He has no problems firmly, and usually very politely I might add, standing up for himself. Whether he's dealing with an obvious 'back-handed' comment (yes, they're so obvious a 9yo can tell) or honest questions - he doesn't get bothered at all. We have rules about washing and brushing, and he follows them, so he gets to make his own choices... which means he takes them seriously. Good for you for letting your kids 'own' their appearance. How can a kid develop self confidence, if most of their 'self' is dictated by others? I believe a parent should teach and guide, but not do everything for their kids. How else do they learn?

LOL! Connie that anon is almost certainly the boys beloved Aunt Teri who has rather definite views on boys hair. Military brat, then military wife, and a teacher on top of that. Almost all of my anon comments are her. For some reason she can't be bothered to log in. If I had thought it was a real troll I would have deleted it with out a second thought. I don't have time for trolls. So far I have been lucky and haven't attracted many trolls so I still allow anon comments.

I wholeheartedly agree with you about kids hair! Teri rolls her eyes at their hair but spoils them rotten anyway. I think part of the reason they want long hair is just to bedevil her this summer. They know I will back them up and not let anyone force them to cut their hair. Besides Dave usually has a ponytail himself. As long as the kids hair is clean and brushed and out of their eyes I don't really care what they do with it. Cody always had rather longish hair except when he had a mohawk. He has died his hair black and dark blue in the past. His is only cut now because of JROTC. I feel like there is plenty of time in their lives when they will have to cut their hair for jobs so they should do what they want now. After all hair grows back, tattoos and piercings are rather more permanent. When someone would get up in Cody's face about the mohawk, He would just shrug and reply, "Mom said I could do what ever I want with my hair as long as I stay on honor roll." Unfortunately in the states the school district's dress code was such that mohawks and dyed hair or even very long hair on boys were unacceptable during the school year so he would celebrate the first day of summer with an extreme hair cut and the last day of summer with a buzz cut, then not cut it the rest of the school year.

As to the computers I don't know who is worse the kids or the big boys. We bought our new imac the same day Dave's co-worker bought a macbook pro. They spent the whole weekend playing with all the fun features on a mac and comparing laptop to desktop. The little guys were lucky to get any time on the computer.

Well, I'll forgive your aunt then ;D Family gets special consideration and allowances ;D !! I agree with your philosophy. There are going to be times of no choice, and times with too many choices, if you know what I mean, so I think NOW is the best time for kids to learn how to be responsible for themselves - in silly and serious ways.

I have to admit to being a geeky type too. My husband and I have our own laptops, and we have a family desktop, but it was me who frankensteined parts of old computers together to make a 2nd desktop because we didn't have enough computers(!)... yet, there's something about the intense focus guys get when it comes to technology that women/girls just do not do copy. Aggravating, but endearing.

We seem to own a ridiculous number of computers. I have a laptop, Dakota has a laptop, Dave has two, we have a mac mini that was supposed to be the kids but now controls all the media (pictures, music, movies) and now the new imac. How many computers do we really need?

Dave is the one who likes to mess with computers. One of his laptops he bought for $50 and then took it all apart and rebuilt it. He also rebuilt the ancient desktop we had and gave it to our driver in Jakarta. I don't know if he uses it but his wife friended me on FB so I know someone is using that old dinosaur.