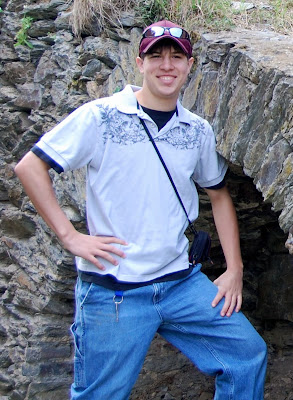 Wordless Wednesday - Rocks in a Pond 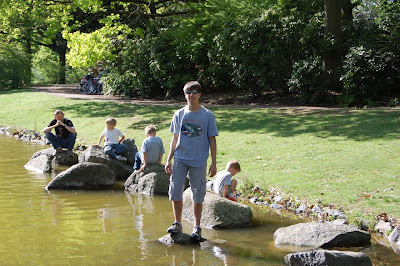 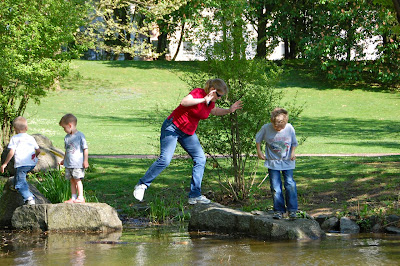 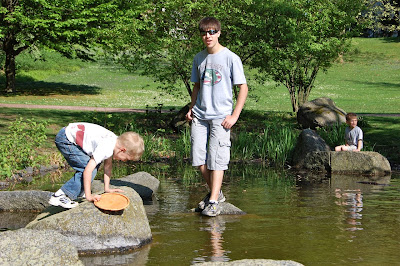 Wii Fit is a Cheeky Buggar!

OK so I asked for it.  I wanted a Wii fit for Mother's day.  Whatever was I thinking?  When we bought the Wii the store was out of the Wii fit.  Dave, being the good husband he is, came home and ordered it that night.  It arrived in record time.  Dave couldn't wait several weeks for Mother's Day so he brought it home and set it up last night.

I was all excited.  I made my Mii, a little digital mini-me for the game.  Mine was all cute; blond, blue-eyed, and SKINNY.  Then I did the set up where the darn thing weighed me, calculated my BMI, and had me go trough some basic balance exercise to determine my starting point.

Poof!! Just like that my poor little Mii blew up like a ballon.   Still blond and blue-eyed, and now just as round as could be.  Who wants to see a fat, digital version of yourself bouncing around on the screen as you exercise?  If that wasn't enough it calculated my "Wii fit age." Apparently I am as fit as your average 47 year old!?! The only problem is I am NOT 47, not even close.  Even worse is the miserable thing said Dave is only 39 which is 2 years YOUNGER than his real age.  Uggh!  There will be no living with him now!
Posted by Shannon at 1:19 PM 6 comments:

For many years, and much to the kid's disgust, ours has been a gaming free house.  While I had no general objection to the kids playing video games at other people's houses, I simply wouldn't let a game system in our house.  I don't like how gaming seems to isolate kids, encouraging them to spend hours lost in cyberspace instead of interacting with the rest of the family.

However after months of German winter weather, trapped inside with the kids, playing innumerable games of Candyland and Uno we have finally entered the modern age of gaming.  We bought a Wii.  I have to admit, I don't hate it.  We spent the entire afternoon all in the same room, playing together, without any fighting and limited whining.  Miraculous! Now Momma wants Wii Fit for Mother's Day. Oh Yeah!

We sent the kids to buy a soda at the feild house while we set up the game. The kids were a little suspicious but went anyway because I think this may be the first time ever we have sent them to buy a soda. When they returned they found Mom and Dad deep in a game of Wii Bowling. 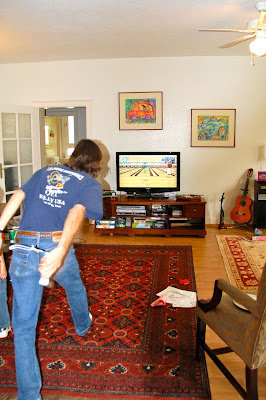 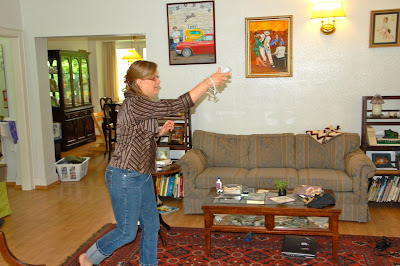 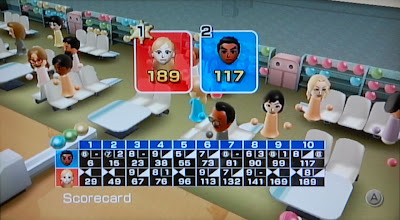 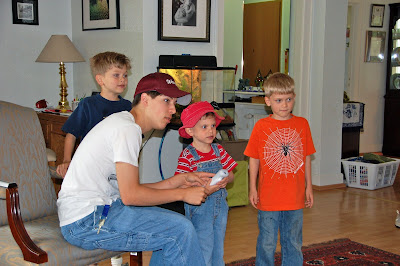 The weather has been pretty for the last two weeks and all the plants have woken from their winter's sleep.  There are flowers everywhere. It is gorgeous.   Today however the weather has turned chilly and the wind is blowing the flowers off the trees and making little whirlwinds of flower petals skip across our yard. Grayson looked out the window and gasped, "Momma it is snowing flowers!"
Posted by Shannon at 4:31 PM 1 comment: 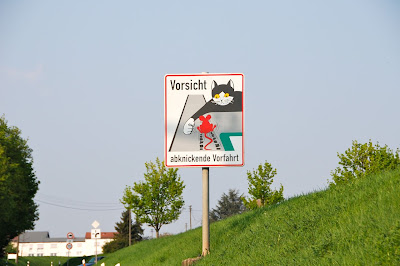 If you are ever in Hessen with kids then you must visit Rheinfels Castle on the Rhine River.  This stretch of the Rhine is thick with castles and many of them are open for tourists, or have been reinvented as  hotels, but few of them are as kid friendly as Rheinfels. In ruins since the late 1700's the castle has no fancy exhibits or delicate art work for the kids to destroy. Instead it is full of dark tunnels, crossbow slits, and impressive views of the surrounding countryside. 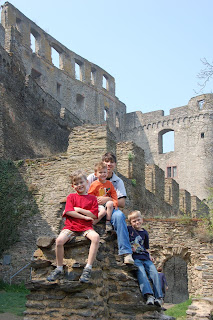 The boys had tons of fun climbing up and down and all around pretending to be medieval knights or Indiana Jones. It used up some of their never ending supply of energy.

David didn't let go of the camera for a minute, so no pictures of him this time, but bunches of cute pictures of the boys and few of me. Some places are blocked off for safety's sake but otherwise this was a wonderland for kids. We more or less followed the self guided tour and map (In English!!) we received with our entry fee. You can check out Rick Steves' self guided tour on the web if you want to know what there is to see. Next time I think we will try to follow his tour as I am sure there were things we totally missed today and a lot of things we saw but didn't understand. This isn't the fault of the map but more a function of letting the kids run and following them. David and I have been in a few castles now but this was a first for the kids. It was their day to explore.

Rheinfels has lots of dark unlit passageways and even underground tunnels so make sure to take a flashlight, or if you are braver than me you can buy candles and matches in the gift shop. 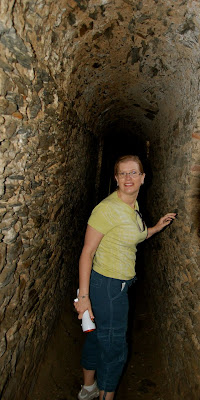 I wasn't about to wander around in the dark with four boys (five if you count my husband) all of whom would think it hilariously funny to blow out the candle leaving me in total darkness. Of course that would leave them in the dark too, but who thinks that far ahead? Also when you are in a dark tunnel and your husband calls your name DO NOT turn around to see what he wants. Fool that I am I turned when Dave called my name and got a face full of flash. For the next few minutes all I could see was spots and a dim halo of light from my flashlight. Glad he did this on a flat stretch and not on the stairs. We stuck to the larger tunnels but there are smaller tunnels that are only about 3 feet high. Braver souls (or more foolish) can explore those as well. 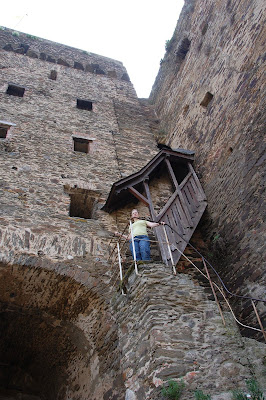 The only problem I had was the guard rails in the higher spots. They seem to be of the "suggest you don't fall here" variety rather than the more useful "I will catch you if you fall" type.  I just don't see how those two tiny rails are going to save me if I trip. I was very, very, careful not to trip.  I have seen these types of rails at every castle we have visited and some were much higher up than this.   In this picture I am about 3 stories up, but it seemed like more to me. We took all our kids up those stairs without accident but since I have no head for heights David had to hold tight to Grayson who can fit right under that bottom rail. I was too busy hyperventilating and holding on for dear life. Colin figured out just how scared I was when we were up at the highest look out point.  He stood next to me then suddenly yelled while lunging at me. He was rewarded with his mother giving a little scream and abruptly sitting down. Anything to get closer to solid ground. Of course some of the other tourists, not to mention the rest of my family thought it was hilarious.  Some day one of them is going to give me heart attack! Of course I could avoid this by not climbing up high but then I am sure I would get teased for being a chicken.  I am not sure which is worse. 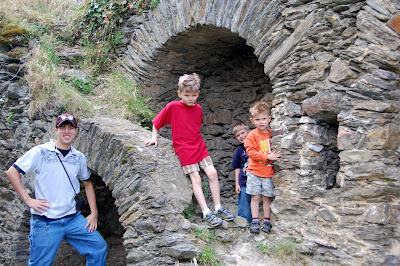 I have no I dea what purpose these arches might have served back in the day but they make a nice back drop for a picture!
Posted by Shannon at 10:26 PM 5 comments:

It's under the bed.

The boys were under strict orders NOT to wake us up and ask to watch TV this morning. Instead they were supposed to clean their rooms. This worked remarkably well. We were able to sleep past 7 am. When we did wake up we could hear the kids giggling upstairs. From the sounds there wasn't much cleaning going on but we did get to sleep in! Success! At least as far as I was concerned.

About 15 minutes after we woke up there was a soft knock on the bedroom door. Grayson peeked in and announced his room was all clean. David asked, "Is it really all clean? All the toys and clothes are off the floor?"

Grayson's eyes positively sparkled as he nodded, "My room is all clean."

"Where did you put everything?"

Grayson giggled as he leaned in and whispered, "It is under the bed."
Posted by Shannon at 11:45 AM 2 comments: 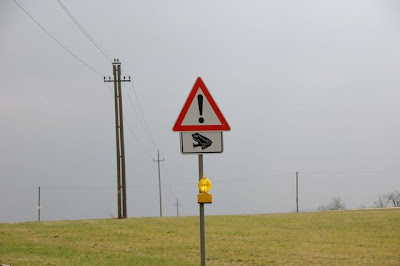 Hey Mikey He Likes It

I decided to make something fun and healthy for the boys to go with lunch. This week is spring break so I have a full house and I am trying to keep them happy, not easy since many of their friends have gone out the country for the break, and they are stuck here with me. I grabbed some frozen peaches out of the freezer, some milk and peach yogurt out of the fridge and dumped it all in the blender.

A few minutes later I had a peach smoothie, although I said it was a peach milkshake. That just sounded less healthy, the kids are wise to me trying to feed them healthy stuff. They would much rather have pop-tarts. Grayson took a cautious sip and announced, "Yum yum that is delicious!"  Success! Next time banana-choco-smothies!
Posted by Shannon at 5:47 PM No comments:

Sorry for the blog silence but just a couple of days after the last snow the clouds parted, the sun shone bright, and the world blushed green. Walking outside today it is hard to believe that a little less than two weeks ago it was snowing. There is color everywhere as the first leaves emerge on trees and flowers are appearing daily. We have been spending every available moment outside enjoying the warm sunshine after the long winter. There have been some exciting goings on around here so check back soon for updates.
Posted by Shannon at 11:19 PM No comments:

Wordless Wednesday - What a difference a week makes! 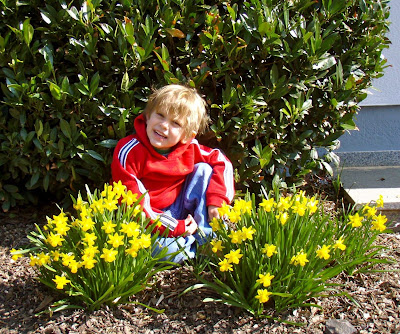