Wordless Wednesday- Let Me Out! 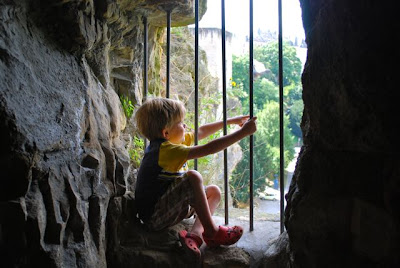 Monday night soup night continues to be a weekly traditions around our house. Yesterday I made one of my favorite soups, split pea soup. I love the rich hammy flavor on cold winter days. Paired with some fresh honey-wheat bread it made a wonderful dinner. The boys however had a different opinion. Even though they had eaten it, and liked it in the past, last night they decided it was gross. Grayson in fact flat refused to even taste it until his brothers declared the soup to be Shrek Snot Stew. While I was unimpressed with the new name it must have tickled his funny bone because he scarfed down his bowl while giggling that he was eating snot. Boys are gross!

A bit after the rest of us finished eating Dakota arrived home from a late JROTC armed team practice and sat down to his bowl of split pea soup. After a few bites he commented, "You make pretty good vomit." Interesting movie trivia, split pea soup was used for the vomit in the horror movie "The Exorcist". Oh yeah... boys... gross!

Moments later Grayson ran by and yelled, "Cody is eating Shrek Snot Stew!" Cody who had just popped a spoonful into his mouth, visibly paled, then gagged. For a moment I really thought he was going to vomit. Apparently the thought of ogre snot was just too much for him. Why cartoon snot should be worse than demonic vomit I am not sure, but it was funny to see Cody so grossed out over a bowl of soup.
Posted by Shannon at 1:19 PM 3 comments: 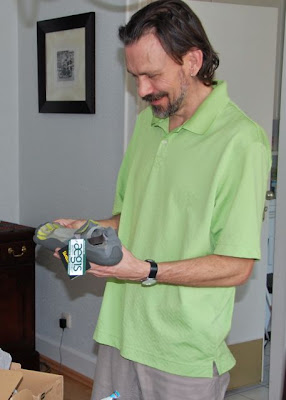 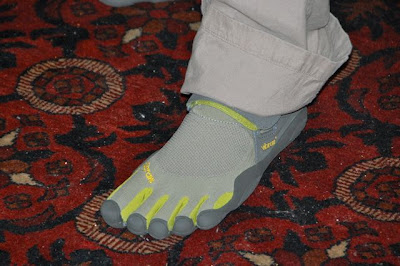 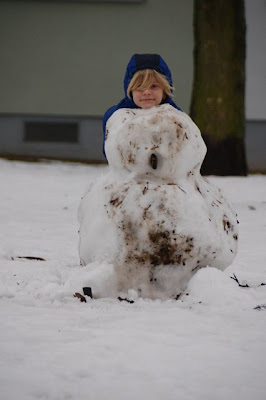 Tonight I was putting dinner on the table: roast chicken, green beans and corn. Grayson ran by, looked at the table, and without breaking stride yelled, "There's a dead chicken on the table!"

Almost instantly the reply came from another room, "I one it!"

From upstairs came the answer, "I two it!"

By this time Alonzo and Colin had made their way to dining room to check out the dead chicken. They must have liked what they saw because in a rush they both yelled, "I jumped over it and I ate it! ...No! I ate it!....No I did!"

**This is a sick little game my husband's family plays on road trips, but it usually involves road kill not my roast chicken. You want to be the one that yells "I jumped over and (insert the name of someone else in the car) ate it." It has been known to reduce the person who has been told they ate the dead, smelly, smooshed road kill to tears.
Posted by Shannon at 8:54 PM 6 comments:

Wordless Wednesday- Then and Now 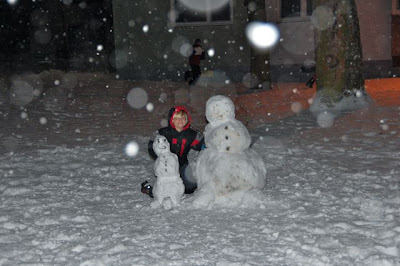 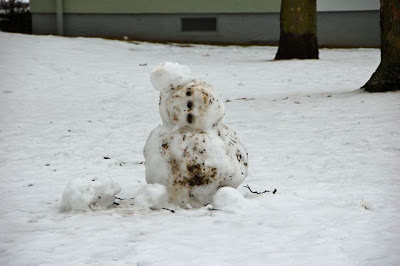 Gaming on the bahn

Disclaimer: Until we moved to Germany I had never lived any place it snowed, so this driving in cold icy weather is a new and sometimes exciting adventure.

Like any video game there are lots of challenges along the way. The roads can be so slippery that one wrong move will send you spinning off the road, never mind that stepping on the brakes to slow down doesn't exactly have the desired effect. Sometimes it works, sometimes it sends you sliding and not always in the right direction. So far I have avoided this particular pitfall, but judging from the number of banged up guard rails not everyone has been so lucky.

When there is a lot of snow on the ground it can be hard to tell where the lanes are or even sometimes exactly where the road is. In this case you follow the tracks of the car in front of you and hope for the best. If it is snowing hard while you are driving, well that makes finding the road even more challenging.

By far the most startling challenge is the road bombs. No, not IEDs like the troops have to face, these are less explosive and more icy. They come in two varieties: one white and fluffy, the other black and yucky. The white fluffy one happens when the guy in front of you on the aoutobahn couldn't be bothered to get all the snow off his car before driving. At some point all or part of that blanket of snow peels off, becomes airborne, and generally lands square in the middle of your windshield. It can just about make you about pee your pants. The trick is not to jerk the steering wheel or stomp on the brakes when this happens. Just keep going straight and use you wipers.

The other type of road bomb is black and gross. It forms from the salty nasty slush from the road splashing up on to the underside of the car and freezing. At some point gravity takes over and a huge hunk of hard black ice breaks loose and comes bouncing down the road at you. Most of the time this type breaks up and scatters smaller ice chunks all around. Once in a while one will bounce up and hit your bumper or door panel making a loud thump and if you are very unlucky it drops from a big truck and so bounces higher and lands on your hood. Yikes!

The last challenge is only for those playing the advanced version of driving in snow. This challenge come from within the car, it is the kids in the back seat screaming and fighting while you are trying to remember to downshift not brake, keep a good following distance in spite of the Porsche-driving genius who just squeezed his over priced sports car/coffin two feet in front of your bumper, and watch out for road bombs. All this while preventing he fight from escalating to actual blood shed in the back seat.

Good Luck with the winter road games where ever you are, they sure are exciting.
Posted by Shannon at 4:35 PM 3 comments: