This Is My Life

It's no secret that Colin aspires to grow up to be Jeff Corwin or Dr. Brady Barr. He spend hours watching Nat Geo Wild and the Discovery Channel. He memorizes animal books. If I want to know what kind of pretty bird is in the back yard I ask the kid. He won't tell just me it is kingfisher, instead he will tell me it is a MALACHITE kingfisher. Then he will give me a run down on similar species, how to tell them apart, diet, and habits. He can happily entertain himself for hours with a pair of binoculars or a camera stalking the animals in our yard. He isn't happy just catching a turtle. He has to know that it is a Bell's Hingeback Tortoise.

You would think all this focus would be a good thing. And it would be if he would stay focused on birds, turtles, lizards and other non-scary, relatively harmless creatures. His new fascination is spiders. Big hairy spiders! Baboon Spiders! I have mentioned previously how I feel about these things. He is even using the spiders to terrify his big brother, going so far as to put a spider in his shoe. EEEKKKK! I will be checking my shoes from now on or maybe only wearing flip-flops. Have you ever seen the movie Arachnophobia? I haven't, and after the last week I don't feel like I need to, I have lived it.

He will scoop up a spider with his bare hands and then let it walk all over him while he continues to hunt for more spiders. It is at once fascinating and horrifying. No one can figure out why he doesn't seem to get bit. His brothers and the maid's 3 daughters follow him around the yard as he collects more and more spiders in a sort of macabre parade, although no one else seems anxious to have the spiders crawl on them. I have lost count of the number of times he has walked up behind me and said "Mom?" just so I will turn around and find him with a huge sider sitting on his head or clinging to the side of his face. I know I shouldn't scream but I do, every time, which of course just eggs him on. I can't help it, I HATE spiders.

I tried to take a video of Colin today when he had only (ONLY!) two (TWO!) spiders on him. I figured I could handle it, but I didn't count on 9 year old little boy humor. Check it out. Unless I can get Dave to take some video this is all there is because I'm not voluntarily getting this close to Colin and his horrifying hoard of arachnids ever again. Oh, and for the record I make him release them AWAY from the house every evening before he comes in for dinner. There will be no repeat of Stanley with a baboon spider. Stanley the camel spider was kinda cute, these things are....ICK!

Wordless Wednesday - My Happy Thought, Dreaming of Summertime in Texas 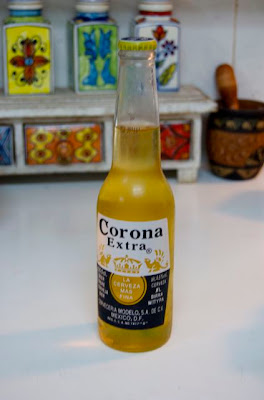 One of the great things about living overseas is experiencing different cultures, and for me that often takes the form of food. So far I haven't had much experience with Malawi foods. Okay, that isn't totally true. I have had some utterly delicious meals at Nature's Gift Permaculture center when I was taking classes out there. They really need to convince Carol to start offering cooking classes, I would be first in line to sign up. Otherwise, I haven't really had a chance to try much in the way of Malawi cuisine.

To be honest after I found one of the guards collecting these for lunch one day, 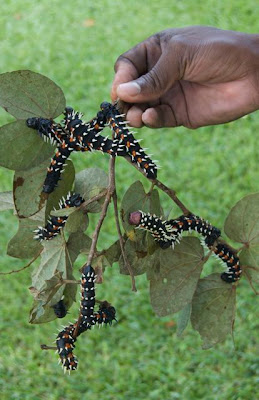 and different guard collecting these for dinner one evening, 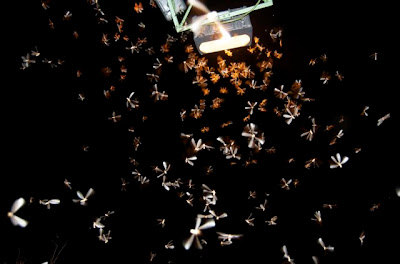 and my maid collecting these for dinner tonight, 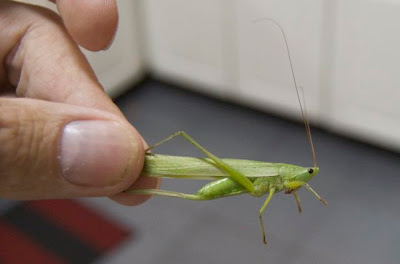 I'm really not all that anxious to experience more of Malawi food.

Call me chicken if you want, it's all right with me. After all you are what you eat, and I had a very nice roast chicken for dinner.
Posted by Shannon at 8:15 PM 2 comments: 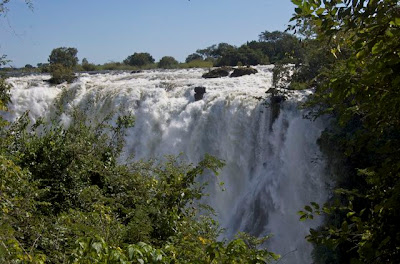 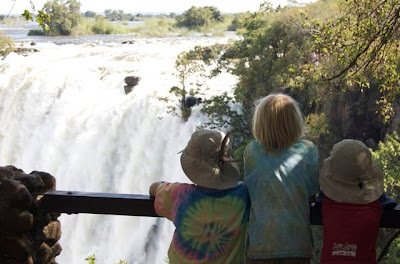 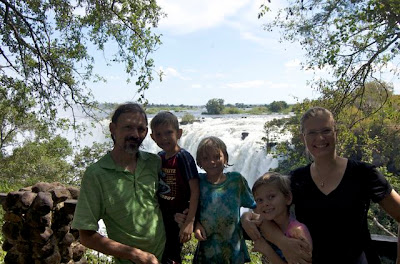 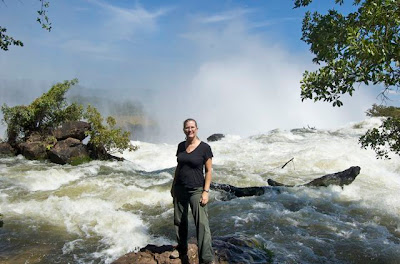 The Last First Tooth and a Spider Too

Today Grayson lost his first tooth. He's my baby. This is the last first tooth any of my babies will loose. It's the beginning of the end of an era. 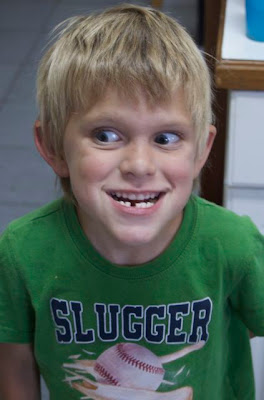 He looks so darn cute with the little gap in front.

Tonight while I was cooking dinner Colin walked in the backdoor, I heard him giggle, he was happy about something. In hindsight that giggle had an evil sound to it. I turned around to find this in his hand. 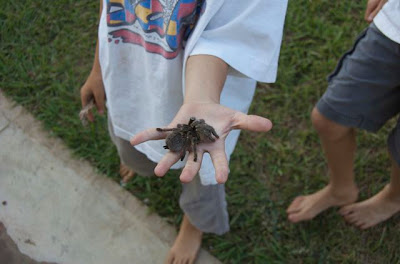 That my friends is a baboon spider. In other words an African tarantula. A real live nightmare that lives in my backyard.

I screamed, the boys, including my husband, made fun of me, then took the little horror outside for a photo shoot. Oh thank God they took it outside! Apparently it is a budding spider super model because David took dozens of pictures while it obligingly posed. Meanwhile I decided I was too traumatized to continue cooking, poured myself a glass of wine, turned off the oven, and figured it was about time I updated the blog. Everybody managed to feed themselves so I guess it was a reasonable reaction.

No one was bitten, I have no idea why. I know for darn certain that if I ever lost my mind and tried to pick one of these up I would end up getting bitten and probably die on the spot. Here are a few of the pictures so you can have nightmares too. 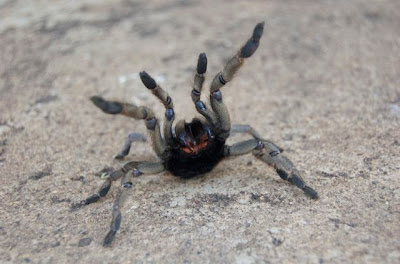 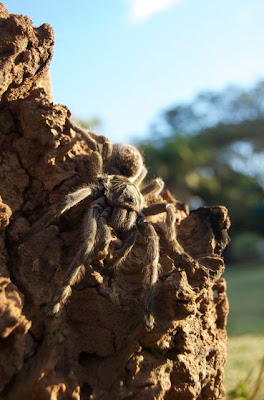 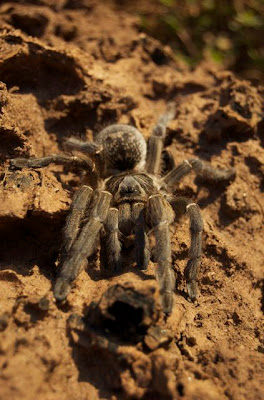 I think it is smiling with its eyes.
Posted by Shannon at 7:57 PM 11 comments: 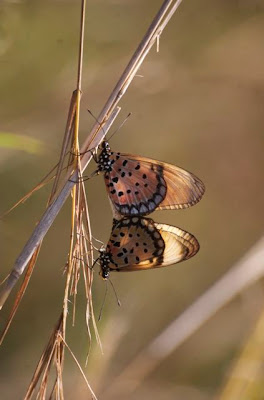 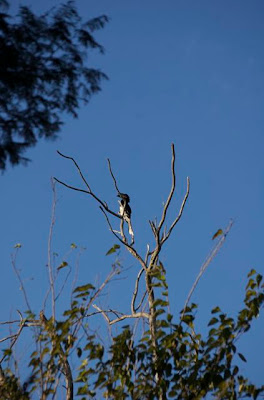 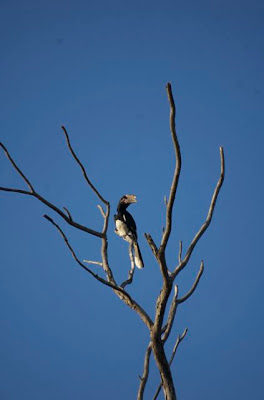 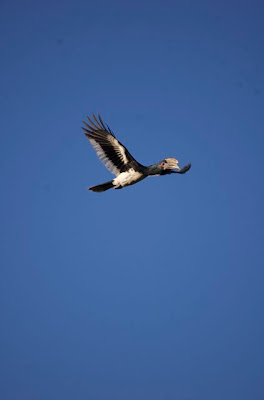 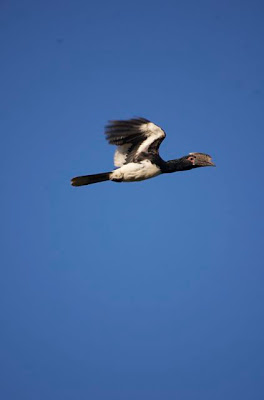