A few weeks back David posted this little picture of shells on his FB page.

Which led to this exchange: 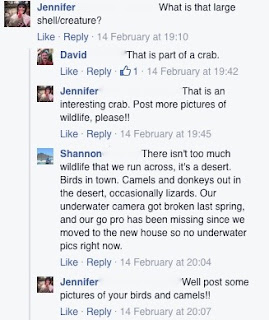 Our niece Jennifer wants to see more wildlife pictures. I argued there isn't much wildlife here in the Arabian Desert. Since then I have been paying attention and noticing more and more wildlife.  Turns out there is a lot of wildlife here. Not much big showy animals like the elephants, giraffes and hippos we saw in Africa, just the occasional camel or donkey.  But there are lots of lizards, birds, crabs, and bugs. Little creatures you have to pay attention to notice, like those shells. The crab shell is about 3/4 of an inch across.  So tiny but look at the patterns on it. Pretty cool.

I rarely post pictures on FB.  I don't know why, I just don't. In fact I rarely post much of anything on FB. Mostly I just read what other people post and occasionally comment on something.  I do miss blogging though.  So Jennifer, here ya go, a brand new blog column inspired by you.

Day one. Flamingos! Spotted by Colin (of course) near the America's Cup Races last weekend.  Pictures by your Uncle David. 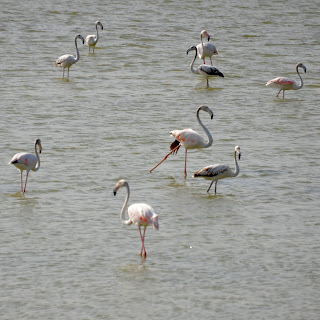 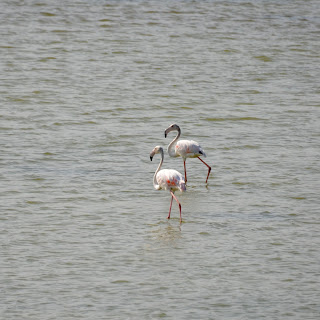