I mentioned the other day that I love food and I love cooking. For the most part my family doesn't really appreciate this. My husband and 3 of the kids are picky eaters. I announce that I am going to make curried lentil soup someone gags, I offer up poblano and mushroom tacos and apparently I am trying to kill them. Terribly picky eaters. David will at least try anything I cook. He has come a long way since we got married. The three kids though complain no matter what is served.

My saving grace is Colin. He loves food even more than I do. He even loves the things I don't. He will eat anything except feta cheese. Seriously. Here are just some of the things he likes: Frog legs, fish head curry, sushi, edamame (to be fair all the kids like this), creme brulee, gnocchi (he is the only one of the kids that doesn't call it knee-yucky), eggplant, mushrooms, sardines, even DURIAN and no he isn't allowed to kiss mom after the durian unless he wants me to throw up on him. I am convinced he will grow up to be a famous chef like Anthony Bourdain. He already has the attitude for it.

On the rare occasions I can find a cooking show on TV he will curl up with me and watch it. There aren't very many cooking shows here though. In Jakarta we used to get bunches of them, mostly they were travel food type shows. Colin's favorites were No Reservations with Bourdain, World Cafe Asia with Bobby Chinn, and of course his absolute favorite Bizarre Foods with Anthony Zimmerman. That last being the food show most likely to make mom toss her cookies.

I thought Colin had pretty much forgotten about food shows until I overheard this comment in the car yesterday:

"The key to get the most flavor out of it is to suck on it, not chew it."

That was such a foodie kind of comment you might have thought he was talking about some strange new dish, or a rare tropical fruit. So what was he discussing so seriously? Nerds, as in the candy. 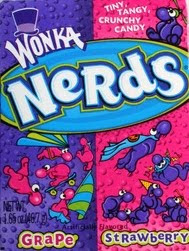 How cute is that? He loves food but obviously isn't a food snob. I had to fight to keep from giggling out loud, he is such a doll sometimes.
Posted by Shannon at 7:11 PM

Don't knock the Nerds - tiny bits of intense flavor... best way to cure a candy craving, without eating much candy at all. :D I've always encouraged my kids to try everything, and they rarely ask for 'kid food'... what's up with the idea of separate kid food anyway? They learned about hot dogs from restaurants and call them sausages. Honor learned of American cheese at someone elses house - she asked for it as "the square flat cheese in paper"! (I buy it for her as she doesn't like milk, so the extra calcium is a good thing.) I like to cook, and I like to experiment. I don't expect everyone to like everything all the time, but I do expect them to try it, each and every time I make something. Tastes change, as do foods with the seasons, and so do my recipes! I can rely on my guys to like the meats and casseroles, my girl to like the veggies and desserts... and when we go out, it's not a pain to try and feed them... except when they don't like what's pushed as 'kid food' on the menu. Good you have at least one to share your love of the food goodness!

Oh, the joys of picky eaters.
I saw part of an episode of Bizarre Foods while sitting in a doctor's office the other day. All I can say is UGH!