The laundry area is finally clean. It is a laundry area not a laundry room. Not so long ago there was one room with all the washers and dryers for the whole building down in the basement and you would have to drag all your laundry down to the basement to wash it. Did I mention that all large family housing is on the 3rd and 4th floors a LONG way from the basement? So the powers that be came in ripped out the cabinets at one end of the kitchen and made a laundry area. I can say that I prefer my laundry room hidden away somewhere not in my kitchen, but it is better than having to drag umpteen loads of laundry down four flights of stairs everyday.
OK back on topic, and sorry about going off on a tangent there. This was the kind of cleaning I hate most. Fussy cleaning. Not much to throw away cleaning. Yes the piles on the floor were thrown but they were from the book clean out yesterday. They don't count. The teenager was SUPPOSED to take them out last night when he (sort of) cleaned the kitchen. I thought about dumping the cat's litter box in his bed, but decided I better not. I would just end up washing the sheets.
There wasn't much to throw out because this is the place that everything gets dumped. Find a monopoly piece? Throw in the laundry area. Lost a button on your shirt? Toss it on the dryer. Bought some stuff that needs to go to Malawi? Shove it on the little shelf. The laundry area functions as a catch all. There are several areas where junk collects, but this is by far the worst. Mostly because it is so easy to ignore and it just keeps piling up.
I found: 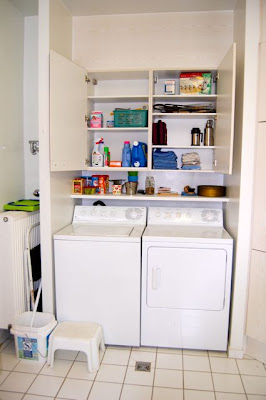 I am sure there was other stuff, but I am blocking it at this point. I am done! I am going to eat some lunch before I take Alonzo's piano music up to the school. About 10 o'clock this morning I noticed it still sitting on the piano, DRAT. Then I am going to come home and drag all the books up to the book swap, buy a Big Red and relax while I watch my books go bye bye. Sweet!
Posted by Shannon at 1:12 PM

You are my HERO.

And I just had to laugh when I read the part about the Not-so-Wordless-Wednesday. You're too funny! I have no clue how you've managed to have Wordless Wednesdays in the first place. I can't shut myself up enough to even attempt them.

Kolbi --Self control girl, self control. Next week’s WW is just for you, I just need to give myself a pedicure before then so I can take the picture.

Monica -- You know I will help you out, for a price. How about some of Ed's cooking and a beer. Will be available during July.

Bfiles--This is the second house in a row with the washing machine in the kitchen area, not off in a laundry room. What gives? Some one please tell the-powers-that- be in DC that no one wants to see the laundry while they are cooking dinner.

That looks great! Such accomplishment! If life in the FS offers nothing else to EFM's it's the opportunity to go through all the junk that we collect (ratti rags, weird pots, etc) every few years to get rid of it.