Today I wasn't feeling well, so I spent most of the morning curled up on the couch trying to ignore the fact the kids were totally trashing the house. Grayson was the only one I was really worried about, Alonzo and Colin are big kids and capable of entertaining themselves, so I wasn't really worried when Colin disappeared for a while.
I did start to worry when Colin asked if he could use a knife to cut some pickles up for a snack. Kinda thought it was a weird snack but whatever, so I reminded him to be careful and let him go. A while later he came back out and asked where I kept the "pepper-ika". I heaved myself off the couch and went to see why he needed paprika. Turns out that David had showed him how to make deviled eggs on Sunday. Colin wanted a snack and found the rest of the Easter eggs in the fridge and decided he wanted a deviled egg for a snack so he made one. He couldn't find any pickle relish so he just chopped some pickles to make relish and of course the paprika was the finishing touch. I tasted a little of the filling that was left in the cup he used to mix it. He did a good job. Pretty yummy! 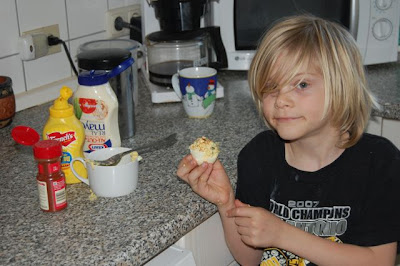 Don't you know he is thinking take the picture already so I can eat my snack.
Posted by Shannon at 11:58 PM

You know, I consider myself a reasonably accomplished cook and I don't know that *I* know how to make deviled eggs, actually....

That is awesome! Good job Colin!!

Awesome - deviled eggs are a snack worth the work!

takes after his momma in the kitchen! well, and his daddy! let me just say his hair is AWESOME and i am so jealous and SOOOOOOOOOO putting my dibs on him for sofie - tell dave. ;o)

Can we just declare them betrothed and set a date in say 16 years or so? Aren't arranged marriages coming back in fashion? What do you think? What beautiful grandbabies they would make for us.

Still one of favorite pictures is that one of them holding hands in Cathedral Park.