I like going to the ball. I like getting dressed up and playing princess for the evening, I don't think I want to do it all the time but once in a while is great fun. I have been privileged to attend several balls in Indonesia and in Germany. I don't know when the next ball will be, anyone know if there are balls in Malawi? This last weekend I had a new experience, going to a ball in a castle. It was so much fun! Too much fun in fact to fit all into one blog post so I am going to milk it for blog material all week.

We arrived at the ball to find the bus would have to park in a muddy field at the bottom of a rather steep hill. Even the bus driver moaned, "Oh your shoes!" when she saw all the women's heels sink sadly into the mud. I managed to get out of the mud and up the hill with out breaking a heel, I think everyone else did too. David gallantly held my hand to keep me from falling, heels are really not my thing and heels on a steep hill was potentially a serious health hazard. Think broken ankles and bleeding knees.

We noticed the castle seemed a bit more crowded than one would have expected for the ball, and many people's dress seemed a bit out style, by that I mean several centuries out of style! Turns out that there was a medieval festival going on. We arrived just a it was breaking up for the night. It was pretty funny all the people in black tie formal wear staring at all the people in medieval garb and the medieval folk staring back. I must say their shoes looked considerably more comfortable! 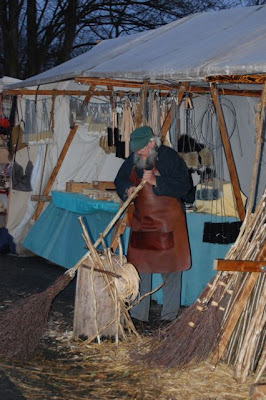 Need a broom? The broom maker can help you out! This guy wasn't staring at anything but his brooms. I guess he sees tuxedos and ball gowns wandering around medieval Germany all the time. 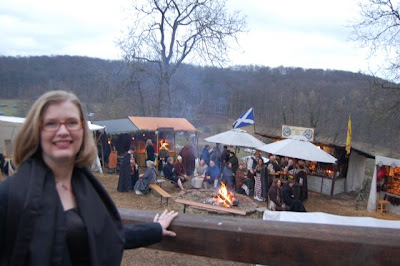 Winding down at the end of a long day. Looks like fun, I was tempted to join them but I had to keep climbing uphill to the castle and the ball. I am sure a cup of grog would have made the climb more fun! 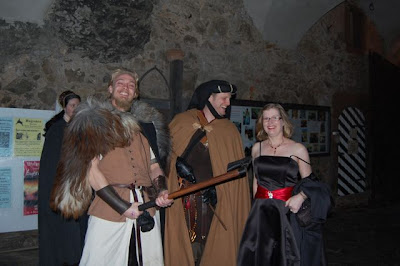 I found these two wandering about and had to have a picture with them. He seems very proud of his ...um... axe, don't you think? I started something when I took this picture. I am sure they were there taking pictures for a while. I wonder if he was smiling as widely after two bus loads of ball goers had their pictures taken. 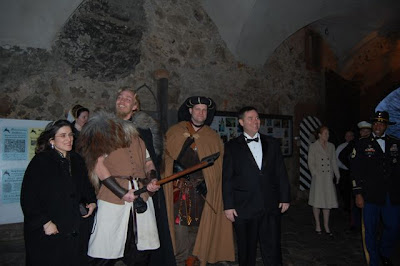 Do you see them lining up? Yep those guys were there a while. They seemed good natured about it though.

Did you notice my hair blowing about in that last picture? If I had known there was going to be a forced hike through the wind and drizzle I would have spent considerably less time trying to make my hair curl just so. Oh well, at least this hair cut looks well with the windblown look.

We did eventually make it to the top of the hill and finally got a good look at Ronneburg Castle. It is a genuine medieval castle dating back to around 1250. Looking around we discovered the festival will continue next weekend, and they have a falconry show so you will probably read more about the castle later. Here is a picture David took of me in the inner courtyard. It was actually taken later the the previous pictures I have no idea why the sky looks so light. Maybe he didn't use a flash? 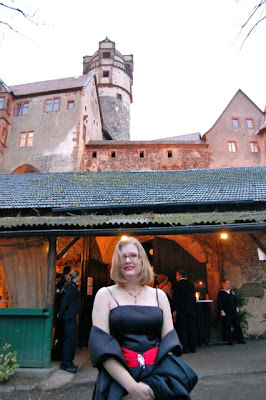 Behind me you see the entrance to the ballroom and in front of me actually behind and to right of where David was standing to take the picture was the bathroom. The ONLY bathroom was across an open, getting darker by the second, courtyard. Did I mention it was downhill a bit? Did I mention it was drizzling slightly? Dark courtyard, slippery wet cobblestones, plenty of beer, high heels, and yet not once did I slip and fall. Not sure why, just lucky I guess. Castles are cool but all things considered I think they would be a bit inconvenient to live in. 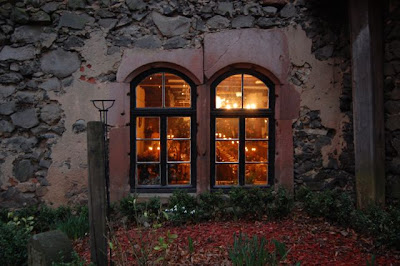 We got our first glimpse of the ballroom through these windows. Gorgeous! Castles are very picturesque. I have yet to tired of touring castles! Just don't think I need to live in one, that's all. Did you notice those tiny white flowers in front of the window? Flowers! Spring is coming! YAY! 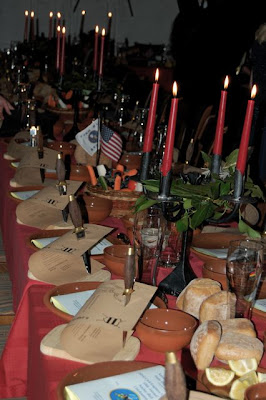 Inside did not disappoint. Check out the table settings. David has already requested his own dagger and small wooden cutting board so he can stab the dagger into it with a bang during dinner. Maybe for Father's day?
Posted by Shannon at 2:11 PM

So cool! Every year, I envy your Ball attendance. :) You look gorgeous, darling! :) As is the castle!

Shannon, those are some of the most incredibly interesting pictures. As I've said, you are GORGEOUS and you get mega Girl Awards for doing so well in your heels in the mud and on the cobblestones during the drizzle, etc.

And I would never have known that it was drizzly and wet and windy, for your hair is just adorable. Perfect.

The table! I can't get over how beautifully the table is set!

And a CASTLE! Going to a ball/evening hosted at a castle!

I just can't get over the attention to detail with the place settings. How very, very fun!

I sincerely hope there's a ball for you in Malawi. You are just soooo pretty all dressed up! I would hate for you to miss out.

Wow, that looks awesome! We haven't been to any sort of ball in years (no Marines in Iceland), so I love seeing pictures from other events. Definitely an evening to remember!

Jenn I don't know when my next ball is. We are going to Malawi this summer and it is another o those posts without Marines. I know there is an British embassy there, in Jakarta the Brits had the best balls, and I know there is Scottish dancing every Thursday, so there is hope...fingers crossed!