The Metropolitan School Frankfurt is in the midst of Book Fortnight. So far the kids have had trips to the Rödelheim Library, and tell-me-a-story workshops. They are reading their hearts out in a read-a-thon. They have enjoyed a visit and book signing by author David Greenberg, who also lead writer's workshops with the kids, teachers and parents. Yesterday and today Usborne books are hosting a book sale, sort of like the scholastic book fairs back home in the states. Tomorrow the fortnight will conclude with a a second grade library sleep over. Colin is over the moon knowing he will be staying overnight at the school library while his brothers will be sleeping back home in their boring old beds. Some kids have all the luck.

Today is Dress Up as Your Favorite Character Day. Alonzo chose to dress as Bad Kitty (thanks to Aunt Teri for sending him Bad Kitty Gets a Bath when her library had a book fair! You are the best Librarian/Aunt a kid could want!) He stole on of my head bands, a little tape, construction and imagination and he was all set. Grayson decided to be a bug from one of David Carter's pop-up books. We dug through the dress up box and came up with an old bee costume. Perfect! Colin knew just what he wanted to be, He wanted to be Hedgie the Hedgehog from the Jan Brett book Hedgie's Surprise. He said it would be easy, just spike his hair and color his nose. One problem, he has really long hair. I tried, I really did, but I couldn't get the gel to hold up all that hair, it made spikes that just drooped over. Hedgehogs are spikey, not droopy. And anyway porcupines don't have spike that long, never mind hedgehogs. I did suggest a haircut and got yelled at by Colin and David, but Cody did offer up his hair clippers. Colin is rather proud of his status of having the longest hair on a boy in second grade, David just likes long hair on boys. Colin still has all his hair, sorry Teri I did try.

Back to the dress up box: Harry Potter, no too many people doing that; A firefighter or a policeman, NO! 'nough said; Stellaluna, no that's for babies, how about a dinosaur? Cool! A dinosaur it is! I quickly stitched up the small tear in the knee and we were all set for school. 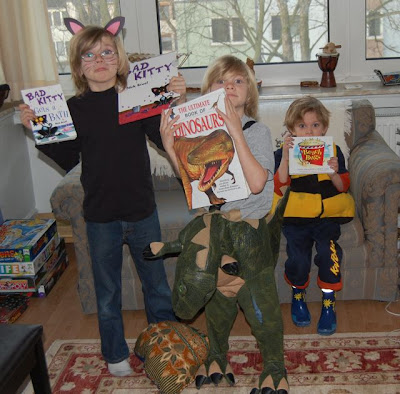 Here are the boys with their costumes on. I did sew up that tear in the dino costume and Colin realized that the book he was holding wouldn't work because he was supposed to dress up as a character and the book he was holding was non-fiction. A quick rumage through the shelves and we came up with How Do Dinosaurs Eat Their Food? We decided that would work well enough.
Posted by Shannon at 2:55 PM

A sleepover at the library!?! That sound so incredibly neat!

When I was their age, I would have killed for something like that! What a nifty idea...

OMG! That's so great! The boys are getting so big! Cannot wait to see you all this summer. :)

I LOVE the emphasis that schools are putting on reading these days. I do not remember that when i was in school... fortunately I was born to love books. It is so good for you! I love the kids' costumes (and all the good ideas). No, you cannot spike long hair, even if you braid it thin and use pipe cleaners :D

Wow! Awesome costumes! We had dress as your favorite book character last year for Dr. Seuss's birthday! I want to have a read in at our library! I want to hear all about it! Bad Kitty has a new book out! I'll save it here for the summer.