This week's Weekly State Department Roundup is being hosted by Lauren at Global Geraghtys. The theme this week is "I've Never Eaten That Before." Be sure to click over on Friday to find out what strange things people have eaten during their travels.

I have always been open to trying new food, unless of course it came out of the ocean. I don't like most seafood, so fish are safe around me, otherwise it is fair game. Growing up we raised a lot of our own meat. In addition to the standard cow and pig a year we also raised ducks, chicken, geese, guineas, turkeys, rabbits, goats and occasionally other birds if my mother found something new in the poultry catalog. Yes, you can mail order live poultry. Dad hunts so we had venison most years. Dad also fancies himself a gourmet so we would eat any weird meat he found for sale: rattlesnake, bear, alligator, crawdads, frog legs, you get the idea.

Lest you think we ate only meat we had a large garden and we grew what ever weird thing was in the Burpee seed catalog. Blue potatoes, kohlrabi, yellow tomatoes, spaghetti squash. If something strange showed up in the catalog it was a safe bet it was going to show up in our garden that spring.

When we moved to our first post in Jakarta I was ready to try new things. I very quickly found out that tropical fruit is an acquired taste. By tropical fruit I mean tropical fruits other than pineapples and mangos. There are bunches of fruits that are available in every market in SE Asia that you will never find in your average grocery in America. There is salak (snake fruit), mangosteen, dragon fruit, jackfruit, guava, jambu air (water apple), longan (dragon's eye fruit), rambutan and so many more. Some of these I liked, usually the ones with mild flavors, most I found repulsive. The flavors, smells and textures were just too weird. The kids quickly grew to like them all.

There was one fruit none of us were brave enough to try. A fruit that smells so bad, it is illegal to take it on trains, planes, or into hotel rooms. A fruit so vile that even Andrew Zimmern of Bizzarre Foods can't stomach it. The man eats bugs and likes it, but he can't eat this fruit. And yet this fruit is considered a delicacy.

The undisputed queen of asian tropical fruit is of course the durian. It looks like a big spiky melon of some sort. It actually grows up in trees. I can only imagine it would be fatal to have one fall on your head. The smell is pungent, overwhelming, nauseating, and totally unforgettable once smelled. Shortly before we left Jakarta we finally decided we couldn't leave without trying durian at least once. 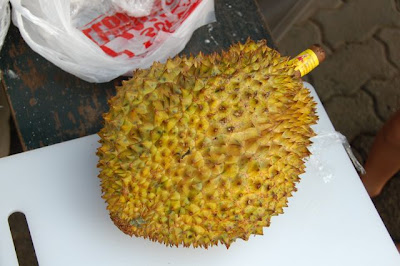 Dave found the taste a cross between diesel and overripe pineapple he managed to swallow his bite. I can't even describe the taste but I won't willingly put that in my mouth again and I spat it out much to the amusement of the gathered drivers, pembantus and gardeners. Alonzo and Dakota refused to taste it. Colin and Grayson claimed to like it but I noticed even they didn't line up for a second bite. 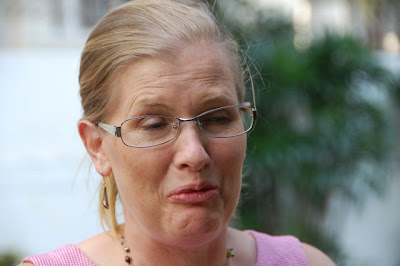 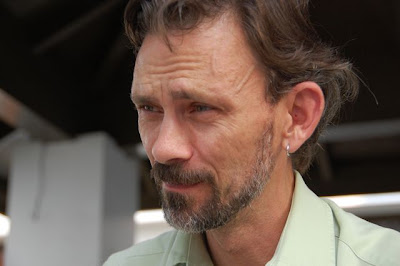 David didn't like it much either but he did better than me.

I am sure there will be many other culinary adventures in our futures, some good, some bad. I can tell you one thing I won't be eating though, mouse on a stick! Not. Going. To. Happen. 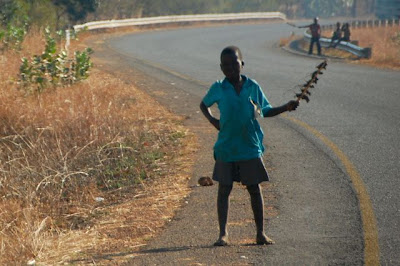 I think I'll skip if ever given the opportunity. Thanks for the warning!

LOL! Oh durian. That's one I forgot. Maybe because I don't think I swallowed either. The Buddhist monks and nuns in Taiwan always had carts full of it when I'd see them at the grocery store. Never understood it.

You can buy durian in the US. It's usually sold in Asian food stores. I tried it at Eden Center, which is next door to Oakwood Falls Church. I had a durian bubble tea. I actually thought it tasted very good but it stunk absolutely horrible. The problem is you can't separate the smell from the taste. I tried but it didn't work. Needless to say, I had a very hard time finishing my durian bubble tea. I don't think I'll be eating it again but it's I guess an educational opportunity to try it once.

LOL, it was your go at the durian that gave me the courage to try it, and I agree, never again.

I ate sea cucumber at the Ritz by mistake.....OMG its not a vegetable similar to Bok Choy, it's a slug and its (I just gagged again from the memory) the most vile and disgusting thing I have ever eaten!

OMG those pics are priceless. hilarious. that NPR show about durian was absolutely hilarious as well. so happy i knew about it beforehand from you. ;o)

I would --love-- to find the tropical fruit that grows in Gtmo that we called "mamacitas". Haven't found them since. . . googled a lot. . . they were delicious and a great part of my growing up years.

I'm a bit squeamish about weird meats, though. Used to be vegetarian. Not anymore, but still. . . skinless, boneless chicken breasts are easiest for me to deal with.

Love the photos! I remember Durian from my Sri Lankan days.... Yes, the smell is overwhelming! but I remember enjoying the flavor enough. Must have been just the right amount of ripeness, not enough to scar me from the mere memory, but not leaving a desire to locate it ever again! Your reactions are priceless! And I agree, the mouse-kababs are a passer. Great post!

I have seen dried durian for sale here in the local grocery store. I haven't been tempted as most people I've heard talk about it share reports like yours! My dad was also a Burpee catalog adventurer. I liked trying all the new veggies. He also experimented with interesting flowers and other plants, including cotton.

Thanks for the submission! The pictures are priceless!

Great post! I have to say I remember liking durian when I finally got the courage to eat it while living in Thailand. I agree with Nomads above; I think in a state of perfect ripeness the taste is worth the smell.