If anyone in your family has a fascination with bugs, or has ever wanted to be an entomologist, then Malawi might just be your dream post. I know I am spending way too much time talking about nasty creepy crawlies, but I live with five males all of whom seem drawn to critters. The grosser the better.

Today Dakota comes home from work and says "I have something to show you, it's in the van." Dave piped up "You really should go look." So off I go, all unsuspecting. I am slow that way sometimes. You would think I would learn by now, Huh?

Dakota pulls out his SeaWorld cup that I bought him at last summer. Note to self: Throw away the Seaworld cup when he leaves!! He opens it up and dumps out this nightmare. 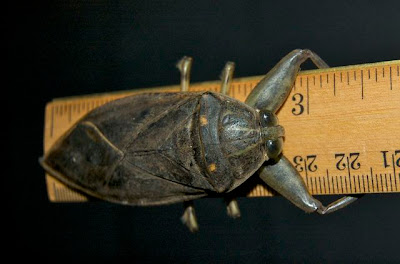 That's a waterbug, no not a big cockroach, a giant water bug. Also known as a toe-biter. To all my girls back in the hood who are looking smug right about now thinking that these things don't live in Texas, get over yourselves, they totally do. Of course those are little bitty things only around a inch and half long. We found several at our house in San Antonio so I recognized this thing right away. Mostly because they bite and I make a point of knowing what critters in the neighborhood are likely to hurt me.

Look at this face. He is so pleased with himself that he has found a new yucky bug to gross me out. Like Stanley and the termite swarms aren't already taking care of that. You know after looking at this thing I am liking Stanley more and more. 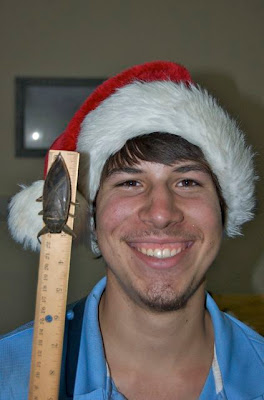 In case you are wondering Dakota did not glue the bug to the ruler. He set the bug on the ruler so he could get a picture of it showing how horrifyingly big this thing is. The bug immediately grabbed hold of the ruler and refused to let go. I think it was hanging on for dear life. Smart bug, I would have stomped on it if I got a chance. 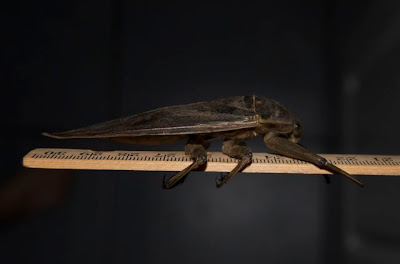 When he was done playing with the bug did he stomp it like a good son, saving his mom from the horrors of the insect world? No he released the nasty thing in our pretty little pond full of fish and helpless tadpoles. 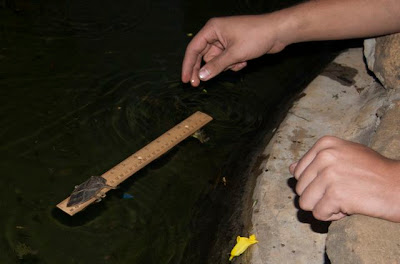 It took it a minute to let go of the ruler. For a second I thought perhaps they would pull it out of the pond and I would still get a chance to grab my boots and stomp it into oblivion. But then a tadpole swam by and in a flash it let go of the ruler and turned into the predator it is. Now it is loose in the pond. With my luck it's pregnant and soon instead of a pond full of fish and tadpoles I will have a pond full of nightmares. 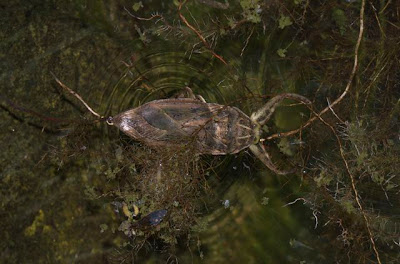 good lord. it just keeps getting better around there. Our impending move to Angola is less and less appealing all the time. Are you all on malaria medication too? Do you have insane fevered nightmares about all these bath tub spiders and 3" long beetles?

oh YUCK. There are some bugs that just don't faze me but that is nasty. I am really sympathizing w you. I often thanked my lucky stars that I did PC in Niger where it's mostly too hot for things to live (other than scorpions). Just think, though, you are going to be one tough mama when you leave that place.

I am SERIOUSLY going to have to stop reading your blog. You are giving me nightmares, woman! Could you please post about a fluffy bunny or a little kitty cat? Preferably one that is NOT being eaten by a giant snake.

Just when I thought it couldn't get any better. Wow. I think you should write a "Creepy Crawly Malawi" kids book. My son would love it. You already have all the illustrations.

(How many times do I have to repeat this to make it true?)

Eve - Relax! Unless you have a house full of boys like mine you probably won't see any of these nasty critters. Most people never see these guys, never mind have one in their living room. However if Angola is anything like Malawi you will see ants, lots and lots of ants. At least non of them bite like fire ants back home. Do plan for this and add some bug killer into your HHE or consumables since we have been told NOT to buy or use any of the local insecticides so we live with the ants for now.

Now click back to October and look at all the safari pictures to remind yourself why Africa is cool. You know I never finished that series, maybe next week.

Donna - My cat and dog are stuck in Texas with my Mom, Sorry Mom! I will try to get something up about the rabbit soon. it is cute and furry, and flea infested! Can you use Frontline on a rabbit?

Bfiles - What wigs me out is these guys can give a really nasty bite!

Becky - One of the reasons I document it here is this is who my kids are right now. Some day I will have the blog turned into a book for the kids.

Remember though that I have the kind of kids that when taken shopping to pick out a birthday present (because Mom failed to remember to order anything in time to get here by his birthday) He came home with a book on how to attract wildlife to your African garden. Sigh! Why does wildlife in my world consist of bugs, snakes, lizards and big birds that leave bones all over my roof? What is wrong with cute furry critters and pretty colored birds?

Oh my! I think I have just finalized my decision on bidding on Malawi with boys! They can go without me! :)

Honor is home sick from school today. She says "Awww! Look at those eyes! It's sooo cute! ... why does she want to stomp it?" I don't think I want to move to Malawi, it seems she would do to me what your boys do to you! ;D We did note that, released into the pond, that critter looks like something out of the PC game 'Spore'.

Oh no....I'm never bidding Malawi! I don't do bugs very well at all!!!! You need to come to London next.

yup, gagging at the size of that thing! holy moly! they live here too? long as they're A LOT smaller, i'll live, but if they were to get THAT size, SHEET!!! blah!

I agree with Bryn, I'm going to do everything possible to avoid Malawi! Ewwww!

Just for the record, I think your kids are cool. But I was a catch bugs, cry when they die kid. I think that bug is pretty cool looking but it looks like its bite would hurt.