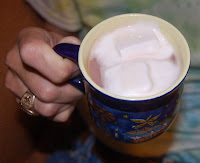 As I mentioned yesterday I decided to try making marshmallows from scratch, mostly because I didn't think to order any for hot cocoa this year. I distinctly remember seeing some at Shoprite, but there weren't any when I did the Christmas shopping. I don't know why I found this surprising. Malawi is one of those places where if you see something for sale and you think you might want it, you better buy it on the spot because it is virtually guaranteed to not be there when you go back and it may be months before it shows back up again, if it ever does.

We always have hot cocoa and marshmallows on Christmas but there are no marshmallows to be had. Thankfully gourmet homemade marshmallows have been all the rage the last few years with stores like William Sonoma selling them for ridiculous prices so there are tons of recipes out there right now. I have to admit that if I had a bag or two of Jet-Puffs I would never have tried this but like many of my cooking adventures desperation sent me to the internet searching for recipes.

My cookbooks all (or almost all) disappeared somewhere along the way during our first international move so I spend a fair amount of time searching the net for recipes. I have a few rules for recipe searches. Stick to sites that have have a way for people to post reviews. Choose recipes that have good reviews and actually take the time read the reviews before starting. That way you can see where people may have run into problems, and how they fixed them. My favorite sites are epicurious.com, cookinglight.com, and allrecipes.com. There are also a few cooking blogs that I follow. In some ways I am glad that I lost my cookbooks. My repertoire of recipes is certainly much more diverse than it used to be.

Marshmallows. Surprisingly easy, incredibly sticky! I used this recipe from epicurious.com that was originally published by Gourmet magazine. I didn't need any special equipment I didn't already have, just a stand mixer and a candy thermometer. It only took about 30 minutes to turn sugar, corn syrup, water, egg whites, vanilla, and gelatin into a tray of marshmallow goo. Several hours later it had dried into a giant marshmallow waiting to cut into smaller marshmallows.

The basic idea is to soften the gelatin in a bit of water and beat the egg whites into stiff peaks. Combine the sugar, corn syrup, water, and a bit of salt and boil it until it reaches 240 Fahrenheit. I went just a bit over that thanks to some kid distractions and it still worked. Then pour the hot syrup over then gelatin, stir until it the gelatin dissolves and then beat on high until it forms stiff peaks. This took long enough to make me very glad I was using a Kitchenaide stand mixer and not my old hand mixer. Then add in the vanilla and egg whites and beat it some more. Pour it into a a greased pan and let cool uncovered for several hours. I just left it overnight and it worked perfectly. That's it. It was pretty easy.

When trying to find out more about making marshmallows I ran across this blog about making marshmallows. It was totally hilarious. I didn't have the same problems she did but managed to run into other problems of my own. The hardest thing for me was cutting the marshmallows. Everything was sticky. I had a hard time getting the slab of marshmallow out of the pan. It stuck to the pan, it stuck to my fingers, it stuck to the knife, it was just plain sticky. I started throwing powdered sugar all over everything and that helped, a lot. One of my favorite food bloggers said to oil the pan, put parchment in the bottom of the pan then oil that too. I will definitely try that next time. I tried cutting the marshmallows with a knife and very quickly switched to a pizza cutter. Eventually I ended up with a beautiful pile of marshmallows and a counter (and floor, and stovetop, and coffee pot) all covered in powdered sugar. It looked just like snow. It finally looks a little like Christmas here in the tropics. 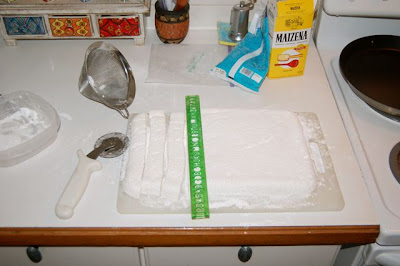 Yes I used a ruler! 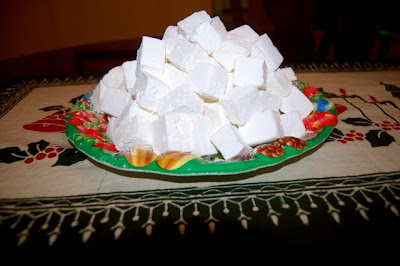 I tried to get David to pose with a cup of cocoa with melting marshmallows for this blog post and suddenly realized why it is so hard to get the kids to all pose nicely when I have a camera. It's genetic! I am including these pictures for your Christmas enjoyment! Merry Christmas Y'all! 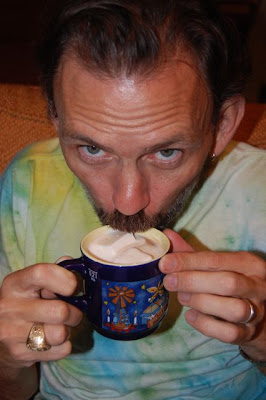 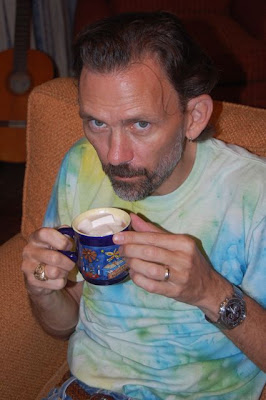 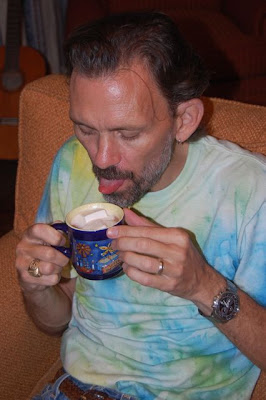 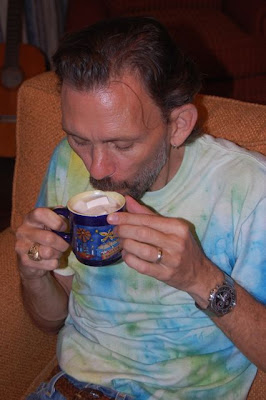 David is a lucky guy! Making marshmallows sounds like a great experiment, unfortunately/fortunately it's easier to marshmallows here than plain gelatin. Wonder if flavored gelatin would make flavored marshmallows? Probably wouldn't be as good in cocoa though :)

This week's State Department Blog Round Up is here:

and you're on it! Please let me know if you have any objections and would like to be removed. Thanks!

We just found all the ingredients to make our own marshmellows, too. Can't wait to try it. Thanks for the tips....hadn't thought about how sticky they could be. We have had a little delay as the grandparents' care package in last week's pouch had a couple of bags of Jet Puffed.....

We just found all the ingredients to make our own marshmellows, too. Can't wait to try it. Thanks for the tips....hadn't thought about how sticky they could be. We have had a little delay as the grandparents' care package in last week's pouch had a couple of bags of Jet Puffed.....

Funny the things we crave, isn't it? Hope they tasted as good as they look. Happy Holidays!

wow awesome marshmellows I will have to try making them myself!!!