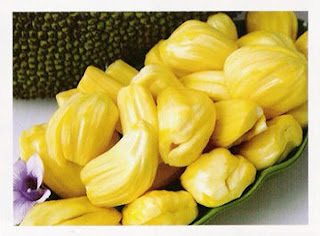 As I said in my post about rambutan, this is fruit that is weird to me. This fruit is not commonly imported to the United States, or at least not available in Texas at my local HEB. It is eaten by many, many people in tropical areas of Asia.

Jackfruit is one of Colin's favorite fruits. I think this is mostly because there is a jackfruit tree in our compound. He is enamored of growing and picking his own food. Strangely I think he misses my gardens back in Texas more than I do.

So what does jackfruit taste like? It is very sweet, has a sort of squishy texture and to me smells a bit like Juicy Fruit bubble gum. My tropical fruit book described it as a pineapple flavor mixed with melon. Mostly I just thought it was sweet and sticky, but not so as juicy as pineapple and melon. It is very large fruit covered in bumps, sort of small spikes. Inside the fruit there is a lot of pulpy stuff and bunches of bright yellow sections each containing a seed. It is these sections that are eaten. The seeds can be eaten as well. The immature fruit can be eaten as a savory cooked dish. I haven't tried either of these specialties. An interesting note, the unopened ripe jackfruit smells nasty, really nasty, sort of like a rotting onion even though inside is fine. 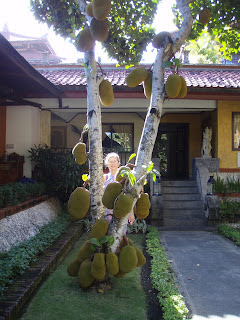 The fruit grows from the trunks and branches of the jackfruit tree. Although it can grow down low on the trunk, like in this picture from Bali, it also grows very high up in the branches as well. Large fruits can grow to a whopping 110 pounds (50 kg). Imagine walking under a tree with bumpy, spikey, giant watermelon sized fruit hanging over your head. Makes me a bit nervous. Good thing that Newton was sitting under a apple tree, not a jackfruit tree.

I have a funny story involving Colin, jackfruit and the gardener: Colin has attached himself to one of the compound gardeners. He follows this poor guy around all afternoon whenever he can't find a friend to play with. I have repeatedly told Colin to leave the gardener alone but the gardener just looks at me and says, "No problem Bu." Bu (boo) is short for Ibu (EE-boo) which is a polite way to address a woman, like ma'am. Colin calls the gardener Anaconda, his name is Uding (hope I spelled that right). Colin decided his name was Anaconda when Uding called Colin anak anak (bahasa Indonesia for child or children) said quickly it does sound a bit like Anaconda. So anyway Colin follows Anaconda around for hours, babbling at him in English while Anaconda answers back in Indonesian. Who knows if they understand anything the other says. He will give Colin bugs and snails, trimmings from plants or seeds to plant. Most of the time they both seem satisfied with their arrangement.

One day however the boss gardener was around so Anaconda had no time for Colin, but Colin wouldn't be discouraged. Finally the gardener went to the back and picked a small jackfruit, broke it open and gave it to Colin. This didn't stop Colin from following him around but it did keep him out the way. He sat watching Anaconda work and stuffing his face with jackfruit. 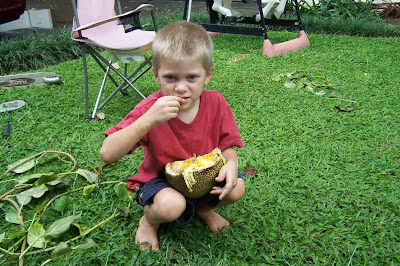 Colin ate so much jackfruit that he didn't touch his dinner.
Posted by Shannon at 5:41 AM

wow!!! hoy yum!!!!
i came from the philippines and we have a lot of those jackfruits in there. being here in the US for more than 3 years, now u could imagine how hungry i am for those fruits. hehehe... anyway, come sunday is our flight going home and my mom has been preparing a feast and jackfruit is one of those! :)

the tree is just amazing! :)

Oh my, my mouth is watering when I was looking at those jackfruit. We have it in our front yard in the Philippines and I missed it so much. I can get some at the Filipino store frozen but it is not as yummy. I am drooling right now :).