Like a black fly in your chardonnay...
Dave called from work yesterday to tell me there were two boxes from Jill in the pouch. That could only mean GIRLS SCOUT COOKIES! I did the happy dance all around the kitchen. Visions of cookie munching after the kids went to bed were floating around in my head. Could it get any better? Last week's pouch brought me a HUGE box of goodies from one of my friends back home full of all the makings for s'mores: chocolate chips, graham crackers, and marshmallows, even some hot chocolate mix to go with all that. Yum.... (Thanks Cynthia, you rock!). Then this weekend I found cocoa powder at Game and almonds at Chipiku so I finally had everything I needed to make double chocolate biscotti. I was busy mixing those up when David called. Biscotti, Somaos*, hot cocoa, oh it was gonna a be a great evening.
Then while I was mixing up the meatloaf my stomach started to feel a bit funny. I drank a little water and ignored it. Later I walked into the kitchen to check on dinner and almost barfed when the smell hit me, my stomach cramped so hard I doubled over. By the time Dave came home I was truly sick and it was clear I was not going to be munching down on anything much less the chocolate fest I had been looking forward to all afternoon. I don't know why I was surprised, Colin came home early from a sleepover last weekend when he barfed all over his friend's house. The stomach thing is going around.
WHY? Wasn't it enough that for our 12th anniversary this weekend we spent the day trying to find the floor in Colin's bedroom and taking care of barfy kid? There were no castles in the plans for this year. Today we were supposed to go out to lunch together for a quick (late) anniversary lunch. That isn't going to happen either. Oh and the best thing? I was sitting in the kitchen Friday night trying to get the Roundup finished for the second time after Blogger ate it when I pushed "publish" and a RAT ran across the kitchen floor. YUCK! How do I get rid of the cloud of bad luck that I have been attracting lately? What did I do to deserve this? And most importantly when will my stomach feel good enough to eat my Girl Scout cookies? 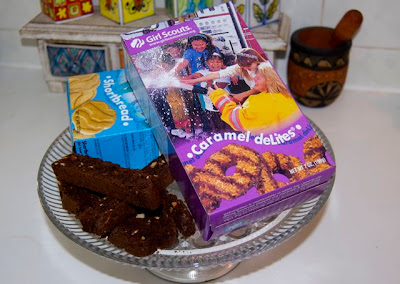 *I know the boxes say Caramel deLites and Shortbread but in Texas they're called Trefoils and Samoas. I had to look it up on Wikipedia to make sure they were the same thing before I ordered. David took some to work today and assures me they are exactly the same. He didn't even apologize for stealing my cookies! Hmpf!

Update: About midmorning I was starving. I cautiously ate a little something and about an hour later I was starving again so Dave was able to take me out for a quick (late) anniversary lunch. He is so good to me even if he is a cookie thief.
Posted by Shannon at 11:57 AM

oh no! I sure hope you are 100% feeling better now and nobody else gets sick!! Enjoy some cookies... we still have one box of samoas and one of thin mints left. They are sooo yummy. Happy Anniversary to you and Dave! :)

NOOOOO.... not the stomach bug!!! I swear we are passing that virus around the internet.... so so sorry!

More importantly - hooray that the cookies made it there to you!!! Enjoy - so glad I have very few left!

Glad you are at least feeling a bit better. Enjoy your cookies!

I would like to think that since I paid for them, I was entitled to at least one box... of each. Good thing Shannon didn't order more than two types.