The FS Weekly Blog Round up is being hosted by Stephanie of Where in the World Am I? This weeks optional talking point (OPT) is toilets. Yeah. Toilets. You wouldn't think toilets would be such an interesting topic but, Oh man are toilets overseas a big deal.

The kid's all time favorite toilets are the ones in the Tokoyo Narita Airport. We had a 8 hour layover there once and I really thought the kids were going to dehydrate themselves going to the bathroom every 10 minutes. Turns out they were just playing with the toilets and the cool turbo handryers. What's so great about a toilet? Well these had a heated seats, built-in bidets with warm water, I think I remember a blowdryer, and sound effects. There was no little silver flush handle, instead there was a control panel with lots of little buttons, in Japanese. The boys were in toilet heaven. It took care of at least an hour of that layover.

Personally I like the self cleaning toilets in Germany. When you flush the seat suddenly starts rotating through a cleaner. Each person using the toilet gets a freshly cleaned seat. No more worrying if someone "sprinkled while they tinkled." Ingenious. I can think of a few dozen bathrooms along I10 that could use this feature!

I am pretty sure that everyone's least favorite toilets are the "squatters" so named because you must assume a squatting position in order to use it. Lord have mercy if you have bad knees, are pregnant, or for some other reason you can't squat down and get back up with out loosing your balance or having to touch the wall. I have yet to be in a squatter toilet that I would willingly touch any surface. 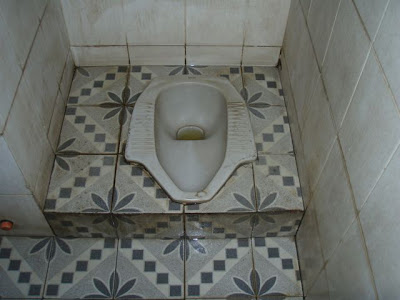 If you should have to use a squatter my son's advice is just to take off your pants rather than risk having them touch the puddle of....nastiness that's invariably on the floor of squatters. Carefully take off your pants and hang them around your neck, one less thing to worry about.
My advice when traveling in an area that has squatters is to skip that second cup of coffee to reduce the chance of having to use one, and carry toilet paper. Squatters NEVER have toilet paper. Sometimes thay have a hose, most often they have a bucket of water and scoop. The idea is to use the water to wash yourself using your left hand (which also explains the taboo against touching food with your left hand), no idea how you are supposed to get dry. Toilet paper, purell and maybe baby wipes are esential travel equipment in such areas. Never leave home without them.

I have managed so far to avoid having much contact with African public toilets. I plan to keep it that way. That bit about skipping the second cup of coffee? Vital! Also no matter how quick the trip is supposed to be I go right before I leave the house, you never know what might happen. There are a few western style toilets in Lilongwe I will use in a pinch but they do tend to smell, and I try hard not touch anything in the bathrooms, ever. Mom thank you for forcing me to "hover" over public toilets, who knew that would become such valuable skill?

When we went to Zambia the boys had to use the bathroom at the border crossing while we were dealing with paperwork. Dakota took the little ones. He came back and reported that the urinal was a long trench in the ground deeper than he was tall. The younger boys added in details about bugs, flies, and smells that I could have lived without. He reassured me that he held onto his brothers while they went so they wouldn't fall in. GAH! I decided then and there that I could hold it until we reached camp in a few hours, and possibly until we returned to our house in a week, depending on the conditions at the camp. Thankfully the toilets at camp were fine, a bit buggy at night, but otherwise not bad. At least I didn't have to hold it for a week. Small blessings!

I've had occasion to use a composting toilet on a reasonably regular basis as I take gardening classes at the Nature's Gift Permaculture Center. It doesn't smell like I thought it would. That's a good thing! They keep a bucket of wood shavings and a bucket of ash next to the toilet and there are instructions posted in English and Chichewa to put a little bit of the shavings into the toilet after each "deposit" and a little ash it if it starts to smell. It seems to work, and it doesn't use any water, a HUGE consideration in an area where water is such a precious commodity. If I had a cabin waaaayy off in the woods on the side of a mountain somewhere, a composting toilet might be an viable option. Maybe.
Well that's the Cyberbones Toilets of the World tour. Make sure to click over to Where in the World Am I? on Friday to check out the Weekly Roundup. I hope someone had a fancy toilet with a bidet, I always wanted a bidet. Don't know what I would do with it, but it seems cool.
Posted by Shannon at 10:06 PM

That self cleaning toilet is awesome.

I know, Right? I want one in my house so I don't have to clean the boys toilet anymore.

(Thanks for your daily visits and continuous support, Shannon. I really appreciate it!)

Isn't the variety amazing! From self cleaning (SO WAY COOL) which I had never seen before, heated which I had heard of only, and squatty.

We do have a bidet in our downstairs 1/2 bathroom here in Maputo. We use it to wash feet and the dog prefers to drink from here like a water fountain. In fact we joke about having a bidet in our own home one day with a sensor so that he can go get fresh water whenever he wants.

That is a great self-cleaning toilet! We have been lucky to be in places with iffy, but generally clean-ish western toilets. Often there's someone in the public toilets, handing out tp and doing basic cleaning, for 'bakshish' (tips). Last year I accompanied my daughter's 1st grade class on a visit to a school for girls here and they had a squatter toilet... bad enough trying to convince your own kid to use own of those things before they get back on a bus for an hour ride, try convincing other peoples' kids.

The Weekly State Department Blog Round-up is posted, and you're on it!
http://tiny.cc/1lr08

If I've made any errors, or you prefer not to be included, just let me know. Thank you!

Funny - after 3 years in Japan, I actually find western toilets to be gross. I've been back in the U.S. for 10 years now, and still think they're gross. Sitting where someone else's butt was moments before? Ewwww. The trick with squatters is to learn the right way to squat without peeing on yourself. Wearing heels helps. But yeah, way cleaner in my opinion -- especially since a lot of places have 'toilet shoes' so your shoes stay clean, too. :)

so funny. love this post. malcolm is really having a problem this year with toilets. you would die if you were here. he's so damn nuerotic about cleanliness that he has taken to holding it............a lot. i am so showing him this post when he gets home today.

Can you do me a favor? Take pictures of his face when he is reading it, I would love to see his expression when he hits the part about the trench urinal!

Oh, yes... we have a bidet-cum-foot-washer here, too. Though, I wish it was downstairs (where the muddy feet are) rather than upstairs.

I always daydreamed of having a urinal in our house. . . yes, the bizarre dreams of a mother with lots of boys.

And squat toilets? I have a horribly embarrassing story about on at the cathedral in Kyiv... I'll tell it in person, but not online!