Wordless Wednesday - I think I'll stay in the car. 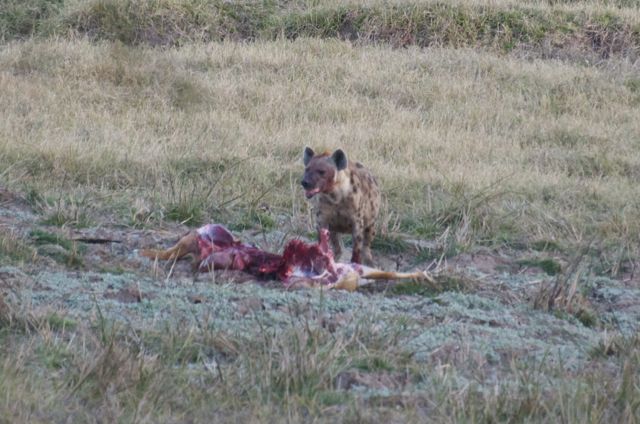 I think that's my dog Henry!

Nomads I'm with your husband, the whole walking safari just seems like such a bad idea. It's like saying "Look I'm a human I have little teeth, no claws, and I can't run. Come eat me!"

Jamie if that's what Henry looks like then Henry isn't a dog, he is a hyena, and he just stole dinner from a leopard.

holy crap. it's like a dingo ate my baby, but instead it's a hyena ate my leopard??? blech!

How close were you in your car? I'm thinking you must have witnessed the kill as much as the thievery -- that is a lot of fresh blood.

No Monica the hyena did not get killed. The leopard killed a puku (deer sort of thing) and then the hyena stole the dead puku from the leopard. The leopard isn't in the picture but he is sitting about 15 feet away watching the hyena eat his dinner. I would swear he was sulking.

Nomads I wish we could have seen the chase. We came up on it shortly after the hyena stole the puku from the leopard. We were maybe 50 yards or so away. David has a nice zoom on his camera so we got some good shots even at that distance.