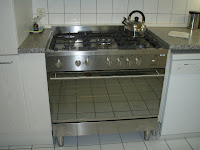 I think I like Germany. You see that stove in the picture? It is fabulous! Five burners, huge oven, one of the burners is even an oversized high heat burner. I am in heaven. I had been warned (repeatedly) about the European easy-bake oven sized ranges, so I was vastly relieved to see this monster in my kitchen. I love to cook almost as much as I love to eat. Unfortunately it didn't work when we moved in, or at least the oven and one of the burners didn't work. So the first work order I put in was to get the stove fixed. I was told someone would be here between 1 and 3 on Tuesday to repair the stove.

"Yeah right!" was my thought. My past experience with workmen, both in the states and in Jakarta, has taught me that a basic job prerequisite for repairmen is the complete inability to tell time.

Tuesday at 1:04 the doorbell rang. It was the repairman here to service the stove. Amazing! A repairman that actually shows up on time! He fussed with the stove a few minutes, pronounced the oven dead, and told me someone would deliver a new range on Thursday between 9 and 11.

Wednesday 9:07 the doorbell rang. It was 2 men carrying a new stove. They dragged this huge thing into my kitchen, checked the paperwork announced, "Sorry, this was supposed to be delivered tomorrow. We will be back tomorrow"

"CRAP!" Now I am going to have to deal with this thing in the way until they come back tomorrow.  I took a big breath to argue when the two guys scooped up the stove and left. I stood there with my mouth open watching them carry the stove back out of my house. 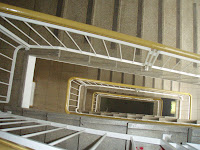 That stove is just as big and heavy as it looks. I live on the third floor. There is no elevator. This is a picture of the stairs leading to my unit. They carried that stove up all these stairs basically said, Oops, my bad, and carried it back down.
This morning at 9:03 the doorbell rang. Same two guys carrying the stove, plus the guy that was here to fix the stove on Tuesday. "We are back." In comes the stove, in comes the repair guys. By 9:30 I had a working stovetop and oven.
I think I am in shock.

Update: This afternoon a guy was supposed to fix a hole in the wall upstairs. (It was there when we moved in, I swear the boys had nothing to do with this one!)  He was supposed to be here between 1 and 3. "Yeah Right!" (I am a slow learner) He showed up at 1:06.  At 1:16 he announced he will be back tomorrow to paint the wall patch, and he was gone. Can we have all American repairmen do an internship in Germany to learn how to freakin' show up on time?

lol good story, and a beautiful stove... i wish i could say i loved cooking, but i hate it, it hurts, and when i'm finished, i don't want to eat the food coz i made it, and that can't be good lol

Actually my wife would love that stove.
I was in Germany in 1964. It is a wonderful Country and the people are fantastic.

Pretty stove! I know you're excited, I remember you telling us the stories of the tiny horrible stoves you had heard!