A Quilt for Colin

I am starting with a jelly roll quilt for Colin. I LOVE precuts mostly because I hate the rotary cutter, or maybe it hates me.  I don't know which, but I do know have ruined a lot of fabric with a sudden slip of that thing.  I'm still learning, but I still have all my fingers, so I'm not doing too badly.

Once I found fabric Colin liked I started on a Pinterest frenzy looking for an idea that clicked.  A few hours/days/weeks later this is what I found as my inspiration. 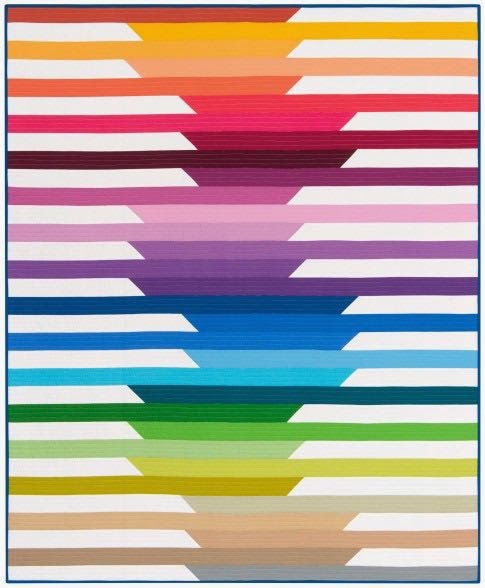 It's the Cascade quilt pattern from Robert Kaufman Fabric.   I already have the fabric so I'm not ordering a kit.  It looks pretty straight forward though.

The next step for me was to try and lay out the fabric to see if I was going to like it. 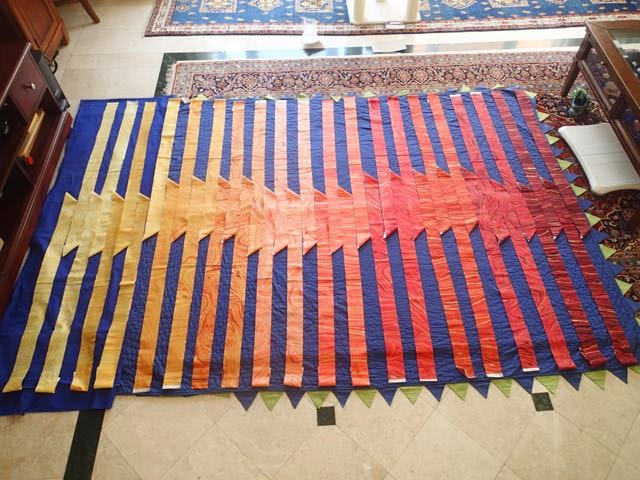 I do not like the stripes.  DO. NOT. LIKE. Also those angled joins are going to give me fits, I just know it. On the other hand I am feeling much better about Colin's choice of blue for the contrast fabric.  His rational was blue is opposite of orange on the color wheel.  Pretty smart kid, it really works well.  I had been thinking black, which I now think would have been too harsh of a contrast.

Quick note: the contrast fabric is the brighter blue under the lighter strips on the left of the picture.  The rest of what you are seeing is the back side of a quilt the boys have had since Colin was 3 or 4. It just happens to be very close in color to the background color so I am using it to play with layouts.  That also explains the blue and green triangles, they aren't part of the design, just part of an old dinosaur quilt. 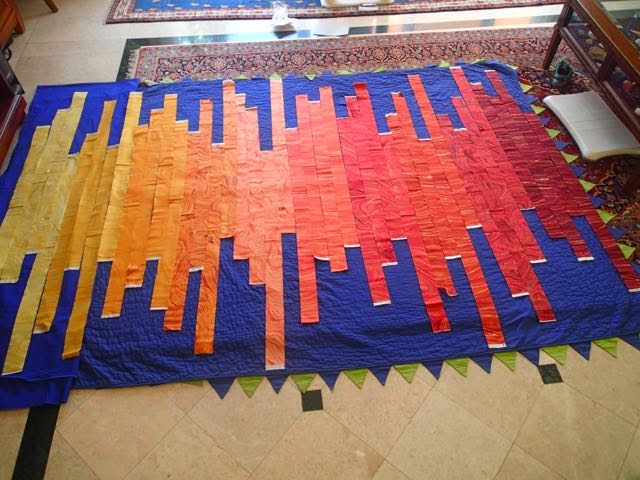 Better, so much better.  Not sure that I like the dark to light gradation though.

Attempt number three.  Getting tired of crawling around on the floor, so I hope this one works. 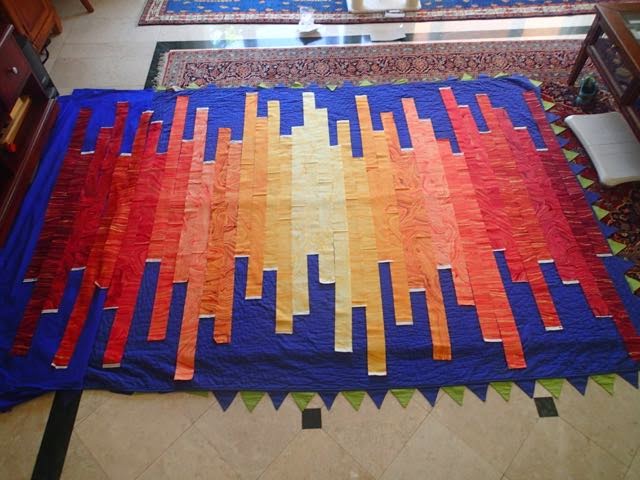 This is my favorite so far.  I'll show this post to Colin tonight and see what he thinks.  I hope he picks this one.  Oh, and Colin?  I'm not sewing that top striped one.  No way, no how!

Now I need to go remake the bed I stole the quilt from before the kids get home.  Let me know which one you like best and have a great day.
Posted by Shannon at 1:32 PM

I was going to say that I loved the ombre one in the middle and then I saw the third layout. LOVE it! Love the colors and the layout. Such a great look for a boy's quilt!

I'm partial to the last one. What fun colors!

Which one is the cheapest? Thats the one I like!

Ouch!!! why did you do that? I was just kidding!

I like the third one the best and I bet that will be the one Colin likes also.

Colin says, "The third one, of course."

sooo amazingly talented, my friend. I saw the quilts you made for terry in person last weekend and they are BEAUTIFUL. this one also looks gorgeous (all of the them, but I love the third).

Thanks friend! I am 8 stripes into the third choice. hoping to get a few more lines pieced this afternoon. Fingers crossed.

I'm late to the party but I liked the third as well. I, too, HATED, the first. I can't wait to see the finished product. This is yet one more thing Colin and I have in common: I love the color orange!