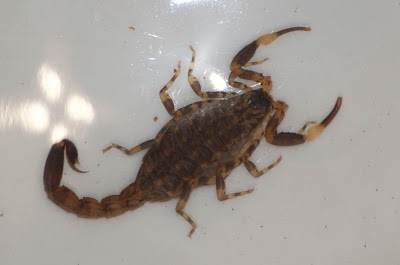 That is a scorpion that COlin caught yesterday after I told him NOT to. Specifically it is a Lychas burdoi, not that anyone cares. I only looked it up trying to make sure it wasn't the scorpion world's version of the black mamba. It isn't, mostly if you get stung it will just hurt like h***. Good to know.

I lectured Colin until his eyes rolled back in his brainless head about finding and catching things that could potentially KILL you and how there is no real medical care and how Pretoria is a long way away. He replied "Yes maam." which I take to mean "Whatever."

Where'd he find it? The bathtub? The sink? Under the toothpaste? I swear I will never come visit you, ever, until that kid is through with his PhD and out of the house.

Somewhere in near the guard shack in the yard. If he had found that in the house I would be at the airport waiting for the next flight out of here! Scorpions BLECH!

OMG. i am laughing so hard right now. i can just HEAR you lecturing colin and i can see the "whatever." hilarious. but also very EWWWWWWWWWW!!!!!!!!!!!! blech, blech, blech. wow. tell colin he is so lucky he has you for a mom. seriously.