This week's FS weekly roundup challenge/theme is Halloween. I have been trying to figure out what I could write that would work. The kids are wearing last year's costume, mostly because we failed to order costumes in time, but also because David is too cheap to buy new costumes. He thinks they should all be hobos. The kids don't even know what hobos are.

I haven't done any decorating, but the kids are off from school next week so I thought I could have them make something. I have a stash of construction paper and access to the internet so we will figure out something. Maybe we could make some ghosts or bats.

Turns out we don't need to decorate anything. Mother Nature did all the decorating necessary to turn this into a house a horrors just perfect for Halloween. Grayson was taking a bath tonight when he came screaming naked down the hall dripping water and bubbles everywhere. I checked him over. I couldn't see anywhere he was hurt but he wouldn't stop screaming. He finally calmed down enough to say the word "SPIDER!" 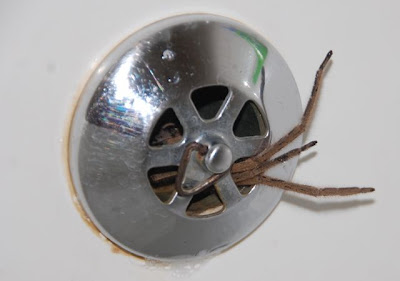 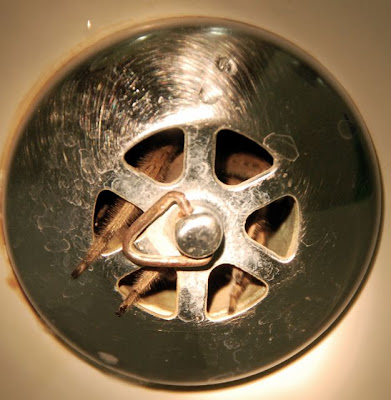 Yeah that would send me screaming naked down the hall too, but that would be a whole different house of horrors. I am not sure I am cut out for this Africa thing. Alonzo refused to take his bath in there, I can't say I blame him. We let him use the tub in the master bath tonight. Colin and David didn't seem upset they just wanted to play with it. David even shook one of it's legs. *SHUDDER* David tried and tried to rescue the poor thing but we can't seem to remove the overflow plate so it is still trapped in the kids bathtub overflow drain. I want to know how long that thing has been in there. I imagine it was pretty small when it crawled in but then it grew until it couldn't get out. Sort of like Aragog from Harry Potter. 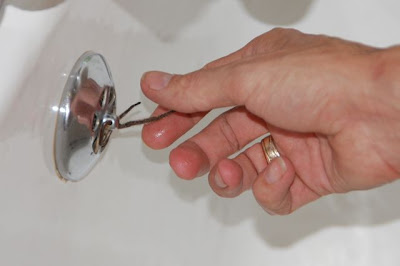 I can see me trying to call this one into facility maintenance in the morning. "Um... I have a spider problem..No not an infestation. There is a spider in the kids bathtub. Can you come rescue the sider so the kids can take a bath? No, no I don't want it dead.* I just don't want it to wave at the kids during bath time."

*I really really DO want it and all of it relatives DEAD but the kids would never forgive me. What they don't know won't hurt them but it may be pretty hard on the spider.
Posted by Shannon at 10:04 PM

YOU WIN! I don't think that I'd planned a contest, just a theme really, but you win the decorating contest... hand's down (all eight of them!)
btw, I had showering screaming kids today too, but they were happy excited noises because we had a gecko in our bathroom.

Oh my! I almost died just looking at the pictures. That spider is huge and very hairy. Scary things that happen in the bathroom to me are even more scary because you are usually in a vulnerable situation in the bathroom.

OK THAT IS JUST BEYOND HORRIFYING!!
I'm completely freaked out. Your poor Grayson.
YUCK.

The kids were totally freaked out by these pictures! Julian wanted to know where that picture was taken (I think to make sure its nowhere near us) and when I said Africa, Amelia said, "Africa is so COOL!"

I saw the picture and started SCREAMING BLOODY MURDER IN THE APARTMENT! AND I CAN'T STOP! And then, when I saw the picture of Dave and the spider's foot or whatever I started shrieking like a little girl!!!!!

Can we all just agree that you are no longer invited to play theme week for the RoundUp?

I am going to have nightmares now. And I am never, ever, ever going to take a shower again.

You are truly gifted at showing the nasty, hairy underside of Southern Africa! By the way, I had totally forgotten that Halloween was coming -- guess I am busy thinking about guests....

Kolbi- Welcome to my life. How did you manage to raise boys that don't do this kind of stuff.

Sorry Donna. Today's post Wordless Wednesday post was downright cute, does that help make up for it?

Kate- if Africa's nasty hairy underside would stay out of my bathroom drain I wouldn't show it to the world. Then again I think people should know what they are getting into if they come here. Next week the posts will be much cooler. We are heading to Zambia to go on Safari at South Luangwa *SQEEE!*

Having a house full of boys I'm sure makes it far easier to deal with this kind of stuff.

But holy hell woman - bless your sweet soul for living with those big hairy creatures.

I swear, for ONCE, just ONCE, I think the State Dept got it right when they DIDN'T give us our assignment in Malawi ... every time you post a photo of one of these furry things, I realize how lucky I was to live in the only other sh*tty posting ...

Awesome!!!! You win on decorating!

I myself, have an Orb Spider helping me decorate outside. She's SO pretty! And delicate. I touch her legs and she stretches! Love it! And she's spooky enough that the kids think this is great. ;)

Wow, love that shot of David shaking the leg...though I am pretty sure I would never take another bath, and I am generally okay around spiders...that is just a bit much though!

Ummm. . . last week I was SO excited about moving to Africa.

This week? Not so much.

This week's State Department Blog RoundUp is posted - and you're on it!

Thank you, and have a great weekend!

OMG, I'm a little late to this screaming party, but I did shudder and freak out sitting here by myself. Hair on spiders is wrong. And I would probably have the kids not only bathing in the master bath, but sleeping with me in the master bedroom with many protections in place against creepy crawlies! Eegads, that was totally freaky. I thought it was bad that I was checking the bath every night for those awful cockroach things here (even though I haven't seen one in a year!)!!!